Christiane Badgley, for the Pulitzer Center

Fishing in Kribi isn’t what it used to be. There are certainly multiple reasons for the decline in fish stock, but everyone here singles out the pipeline as the main culprit. The pipeline cuts right through the middle of the coastal village of Bumé, just south of Kribi, on its way to the marine loading terminal 12 kilometers offshore. The residents of Bumé, who depend entirely on fishing, blame the pipeline for killing their livelihood.

There are two types of fishing in the Kribi area and the pipeline impacted each differently. The hardest hit are the small, village fisherman — like the residents of Bumé — who put their nets out just offshore. These fishermen do not have motor power; they paddle their small dugout canoes out to sea and are unable work more than a few kilometers from shore. 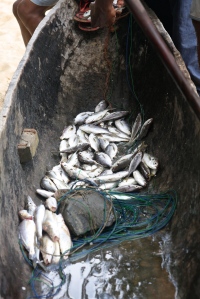 They used to catch the fish that lived in the reef just offshore. That reef was blasted away during pipeline construction and the fish have never come back. Using their traditional fishing methods, local fishermen now pull in only a few kilos of fish at a time. Sometimes, they pull in nothing at all.

As I mentioned in an earlier post, the initial pipeline plans did not include the destruction of the reef. As no one from ExxonMobil would speak to me, I could not find out why this, a significant environmental impact, was not not part of any early reviews. The shallow waters of the coast here are lined with rocky offshore reefs and the Bume reef was clearly visible. If any local fishermen had been interviewed, they would have talked about the importance of the reef for local fishing.

Although ExxonMobil documents claim that there were multiple environmental studies and an extensive consultation process prior to pipeline construction, my research (and that of others) shows that consultations were limited and insufficient. There was a lack of frank, detailed communication. Oil company representatives were often accompanied by government officials when visiting villages, a further impediment to any real dialogue. 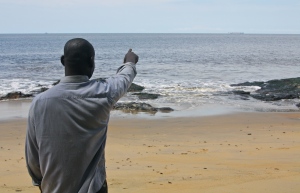 So the pipeline construction crews came through, blasted away the reef, and left behind a village with no viable source of income. The people of Bume — poor to begin with — were ruined. Although the area is dotted with hotels, tourism is still on a fairly small scale here and there’s definitely not enough hotel or restaurant work to employ all the fishermen of a village. Following numerous complaints from residents and NGOs, the fish pond plan was foisted on the residents of Bume. After that failed, COTCO eventually put out an artificial reef made of tires. According to Bume residents, that structure has already detached from the seabed and risen close to the surface of the water. It does not attract fish. Bume residents claim that the fish, plentiful before the pipeline construction, have not returned in the seven years since construction ended. Again, I could not verify this information as no officials would speak to me. But I did see what the fishermen hauled in and it’s very little. I also spoke with local journalists and environmentalists who have been following the plight of the Kribi fishermen and concur with their claims. 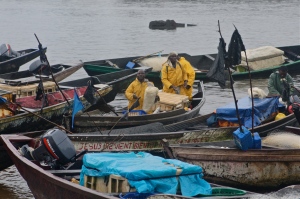 At the port of Kribi, I met with local fishermen who fish on a somewhat larger scale. They still go out in wooden boats, but they are larger and powered by outboard motors. The men are out at sea for two to three days at a time. The boats have just enough room for the fishermen and the ice chests and it’s hard to imagine how the men spend several days out on the water. It was raining the day I was at the port and the seas were choppy. The fishermen coming in were thoroughly soaked. It’s a tough life, but when the fishing is good, there’s enough income to sustain a local economy. The fish they bring to port are packed in ice and are immediately dispatched to buyers who distribute to Douala, Yaounde and beyond. 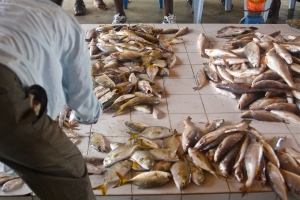 The fishermen in Kribi also had complaints about the pipeline. They, too, report that fish stocks are down, although they see the trawlers Chinese, Spanish and others) offshore and blame them for depleting stocks with their destructive fishing techniques. The pipeline poses different problems for these fishermen. First, there’s a large security perimeter around the marine loading terminal where no boats are allowed, effectively limiting their fishing zone. Then, even more troubling, is the question of oil pollution. In January 2007, a small spill occurred at the marine loading terminal. Unfortunately, COTCO did not release any information about the spill for four days. Local village leaders were kept in the dark for an additional two days. The Cameroonian government agency responsible for the pipeline made no public statement on the oil spill. The spill, which began in the middle of the night, was only detected, visually, in the morning, suggesting that the marine terminal facility is lacking sufficient surveillance technology.

At the time of the spill there was no national emergency plan for dealing with spills at the marine loading terminal, despite the fact that this plan is required by law and should have been in place before the marine loading terminal became operational. Several NGOs released a news statement shortly after the spill that underlined the problems caused by COTCO’s silence. The public was unable to get any credible information about the actual amount of oil spilled, the cause of the spill or COTCO’s emergency response procedures — especially crucial given the lack of a national plan.

Suspicions and rumors filled the void and added to the general public distrust of COTCO. Fishermen today say they can often see oil on the water near the terminal. Is this true? Is this from the marine loading terminal or from passing ships? It is hard to say as no officials will speak and local journalists are thwarted in their efforts to gather credible information. I was consistently frustrated by COTCO’s unwillingness to speak publicly. The case of the missing fish is one example of a problem whose causes are likely more complex than one missing reef. For the public, however, the logic is simple: if COTCO won’t speak, it’s because COTCO has something to hide and therefore, COTCO is to blame.