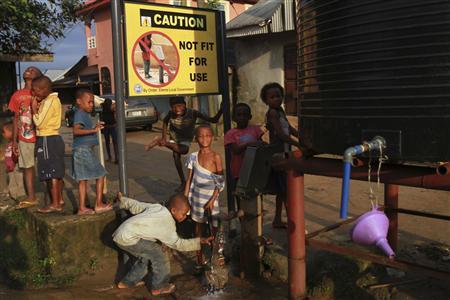 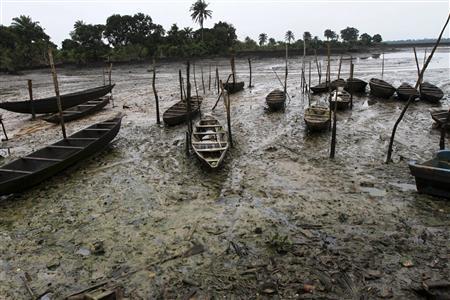 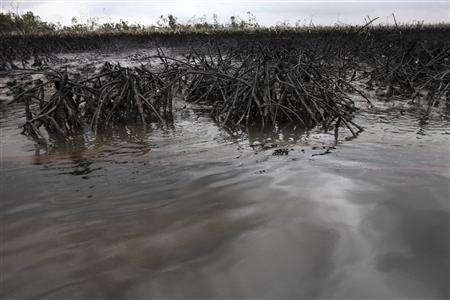 1 of 9. Children play near a borehole where a signboard is erected in Eleme community, outside Nigeria’s oil hub city of Port Harcourt August 1, 2012. A bright yellow sign above the well in this sleepy Nigerian village says ‘caution: not fit for use’, and the sulphurous stink off the water that children still pump into buckets sharply reinforces that warning.

Prosperity has flowed from Ogoniland, one of Africa’s earliest crude oil producing areas, for decades. But it has flowed to the big oil companies and to Nigerian state coffers. Locals have long complained that precious little goes their way. To match Insight NIGERIA-OILPOLLUTION/ Picture taken August 1, 2012.

OGONILAND, Nigeria (Reuters) – A bright yellow sign above the well in this sleepy Nigerian village says ‘caution: not fit for use’, and the sulphurous stink off the water that children still pump into buckets sharply reinforces that warning.

“Can you smell it? Don’t get any in your mouth or you’ll be sick,” said Victoria Jiji, 55, as she walked past the bore hole in her home village of Ekpangbala, one of several in Ogoniland, southeast Nigeria, whose drinking water has turned toxic.

Prosperity has flowed from Ogoniland, one of Africa’s earliest crude oil producing areas, for decades. But it has flowed to the big oil companies and to Nigerian state coffers. Locals have long complained that precious little goes their way.

A landmark U.N. report on August 4 last year slammed multinational oil companies, particularly leading operator Royal Dutch Shell, and the government, for 50 years of oil pollution that has devastated this region of the Niger Delta, a fragile wetlands environment.

It said the area needed the world’s biggest ever oil clean-up, taking at least 25 years and costing an initial $1 billion. Shell and the government swiftly pledged to act on it.

One year on, residents say they’ve seen no evidence that it has begun.

Shell says it is committed to cleaning up Ogoniland, but argues the government must also do its part. Most oil spills are the result of theft by armed gangs hacking into pipelines, it says, and this must be addressed alongside any clean-up.

Nigerian oil ministry officials were not available for comment, but government last week announced a new committee to look into implementing the report’s recommendations.

When BP’s Macondo well in the Gulf of Mexico ruptured in April 2010, spewing nearly 5 million barrels of oil into the sea, its reputation took a devastating blow, and it had to pay billions of dollars to those affected.

In Nigeria, thousands of barrels are spilled every year, largely without negative consequences for the oil companies.

The United Nations Environment Programme (UNEP) report found that the Ogale community, a group of nine villages including Ekpangbala, was drinking water from wells contaminated with benzene – a known carcinogen – at levels over 900 times the World Health Organization’s guidelines.

“Even before the U.N., we knew this water was turning bad. It smells, and people are complaining of itching and skin rashes,” said Walter Olaka, Ogale’s youth president.

Shortly after the report, the government provided Ogale’s villages with water tanks, part financed by Shell. They get refilled most days with potable water, but locals say it’s never enough, and they still use the polluted groundwater for washing.

The tank Reuters visited in Ekpangbala was empty.

“Until now, nothing whatsoever has actually been done … towards the clean up,” said Ben Naanen, chairman of the Movement for the Survival of the Ogoni People (MOSOP), founded by the environmental activist Ken Saro-Wiwa, whose campaign against oil pollution drove Shell out of Ogoniland in 1993 – although the firm’s dilapidated pipelines still criss-cross its swamps.

Saro-Wiwa was hanged in 1995 by the then military government, to worldwide horror.

“We continue to hope that things will change, but those hopes are quite honestly looking slim,” said Naanen, a history professor at the university of Port Harcourt, in the heart of Nigeria’s roughly 2 million barrel-a-day oil industry.

Yet many activists remain upbeat that the U.N. findings are slowly gathering enough momentum to spur action.

The government last week announced “the formation of a Hydro-Carbon Pollution Restoration Project”, though it gave few details.

“The project shall implement the recommendations of the UNEP report on Ogoniland as well as investigate, evaluate and establish other hydrocarbon impacted sites,” the statement said.

UNEP cautiously welcomed the government’s pledge on Thursday, but warned that the clean-up was a huge task that will require long-term financing and urged funds to be released now.

A rainbow-tinted film of crude cloaks the water throughout the creeks and swamps of Nigeria’s Bodo community, giving off intoxicating petrol fumes. Spidery husks of dead mangrove trees blacken the landscape for miles around.

An oil-coated heron picks its way through the sludge.

Joe Vikpee left at 5.30 a.m. on his small dug-out canoe in search of fish. Still on the water 10 hours later, his haul is a handful of small fish barely enough to feed two people.

“They used to be abundant before the spills,” he says.

Shell accepted responsibility for two major oil spills that devastated the Bodo fishing community in 2008/9, but it says efforts to clean up had been hampered by insecurity.

Now, some 11,000 members of the community who say their lives were ruined by the spills have taken their case to the London High Court seeking compensation of “many millions of dollars”, according to their lawyer Martyn Day.

“The people in Bodo are living corpses. You see them alive but they are dead inside. Look at this water,” said Kpoobari Patta, 40, casting his eye over a lead-colored creek.

A Reuters visit to the site on a boat revealed oil pollution stretching for miles in many directions. Shell says a lot of that oil has been spilled since by armed gangs in thieving operations known as “bunkering”.

He said oil theft was responsible for most of the spilt oil in the delta.

Amnesty International’s Audrey Gaughran thinks this is a smokescreen to mask Shell’s and the government’s own failures.

“No matter what evidence is presented to Shell about oil spills, they constantly hide behind the ‘sabotage’ excuse and dodge their responsibility … to properly maintain their infrastructure and … clean up oil spills,” she said.

A page on Shell’s website last month said “the company has had very limited access to enter the area to clean up and remediate spill sites” since it was driven out in the 1990s.

Ogoni activists dispute that, saying they have invited company officials in to review the damage and replace corroded pipelines, which would be safe with the community’s consent.

Local activists who have for years been calling on oil companies in Nigeria to be held to the same standards as elsewhere in the world, are skeptical of the government’s pledge the clean up the delta, the latest of many.

“It’s just an announcement of intention, nothing more,” said Nnimmo Bassey of Friends of the Earth, Nigeria.

“This is a test for the government, whether it cares about its citizens and their survival, or whether they care more about a defective relationship with the multinational oil companies.”

Sunmonu said Shell was “committed to playing its part” in any clean-up, which is also the responsibility of the state.

“It’s clear that the ongoing problem of oil spills in the Niger Delta will only be solved through a co-ordinated effort … We support the Nigerian government’s recent pledge that it will implement fully the report’s recommendations.”

Anger is building in Ogoniland. The Bodo spills pushed many fishermen deeper into poverty, says Christian Kpande, a church pastor and fisherman whose own children dropped out of school when his income from fishing fell.

He warns violence could flare up again in the region.

“I don’t know if they are planning war, but … a hungry man is an angry man,” he said, his boat pausing by an oil slick.

“One day the youth could just get up and lock things down,” he said, adding that they all know where the pipelines are.

Militancy in the Niger Delta over the last decade shut down nearly half of Nigeria’s oil output, until an amnesty in 2009.

The risk of renewed unrest, and the growing risk of financial liabilities from various court cases might ultimately be what spurs action from the government and the oil majors.

A clean-up is “not a complicated process”, says Nenibarini Zabbey, contamination expert at the Centre for Human Rights and Development. “But it requires a high level of commitment.”

That commitment might come as the government and oil firms take stock of the risk of further social unrest, analysts say.

“The Niger Delta is still a pressure cooker of frustration. If those frustrations boil over, it’s impossible to say if it will become another round of protests or militancy,” said Chris Newsom, advisor to Port Harcourt-based NGO the Stakeholder Democracy Network.

“What’s been proven is that it will come on very quickly, very dramatically. If you’re an oil company here, the reputational and other risks are very high … ‘Carry on and hope’ is not a management technique that can last.”

(Editing by Will Waterman)