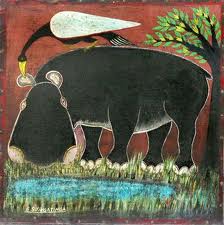 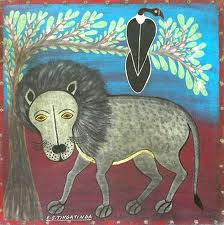 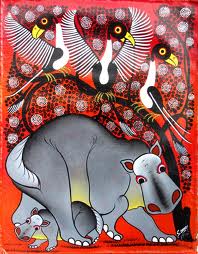 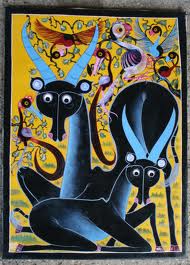 Tingatinga was born in 1932 in a village called Namochelia, in the Tunduru District of Ruvuma Region in southern Tanzania, near the border with northern Mozambique.[3]

In the 1950s, Edward he left his mother and went to work in the plantations of sisal in Tanga Region of northern Tanzania; later, he was invited by his uncle Salum Mussa Mkayoga (also known as Mzee Lumumba), who worked as a cook of a British officer in Dar es Salaam. Tingatinga found a favour with him and was employed as gardener. At the same time he began experimenting first as a musician and (in 1968) as a painter.

His painting were made using recycled, low-cost materials, such as masonite squares, ceramic fragments, and bicycle paint. His style was naïve, bordering on surrealistic and humorous; most of his subjects were stereotypical African icons, such as wildlife or savannah landscapes.

In 1970 he married Agatha Mataka, who was a Makonde from Mozambique. Eventually, Tingatinga’s paintings became very popular among European residents and tourists, so that he was able to work full-time as an artist. He later gathered a group of apprentices and followers, that would later organize themselves into the Tingatinga Art Co-operative Society. Some of Tingatinga’s followers in the Society (e.g., January Linda, Adeusi Mandu, Ajaba Adballah Mtalia, Casper Tedo, Simon Mptata and Omari Amonde) were Edward’s or his wife’s relatives, either Makua or Makonde. Of the first generation of Tingatinga students, only Edward’s nephew Omari Amonde is still living.[citation needed]

In 1972 Tingatinga was accidentally killed by a policeman who mistook him for a fugitive. The Tingatinga school survived him, and grew in size and relevance. Through Tingatinga’s followers and imitators, the Tingatinga style gradually became the prominent type of tourist-oriented paintings in both Tanzania, Kenya, and a large part of East Africa.