Oil and gas development in the World Heritage Sites

More than 25% of natural World Heritage (WH) sites worldwide are estimated to be under pressure from existing or future mining and energy activities (IUCN 2008; UNESCO 2009). However, that ‘pressure’ has yet to be quantitatively deﬁned and assessed for many regions of the world. We conducted a GIS-based analysis of overlap and proximity between natural WH sites and areas allocated to oil and gas concessions as well as pipelines and oil wells for all of sub-Saharan Africa. We found that oil and gas concessions were located within 27% of the WH sites, though no currently active oil wells were operating directly within the WH sites. A proximity-based assessment of oil and gas concessions within 5 km of WH site boundaries included only one additional WH site, suggesting that sites susceptible to indirect impacts from oil and gas development are likely to be those already overlapped by concessions. Our ﬁndings indicate that activity from oil and gas development in sub-Saharan WH sites has to date been limited; however, future pressure cannot be ruled out, due to continued presence of concessions within more than one quarter of the network, and projected expansion of oil and gas exploration within the region. Our results may be used to inform the inclusion of new sites into the WH network. 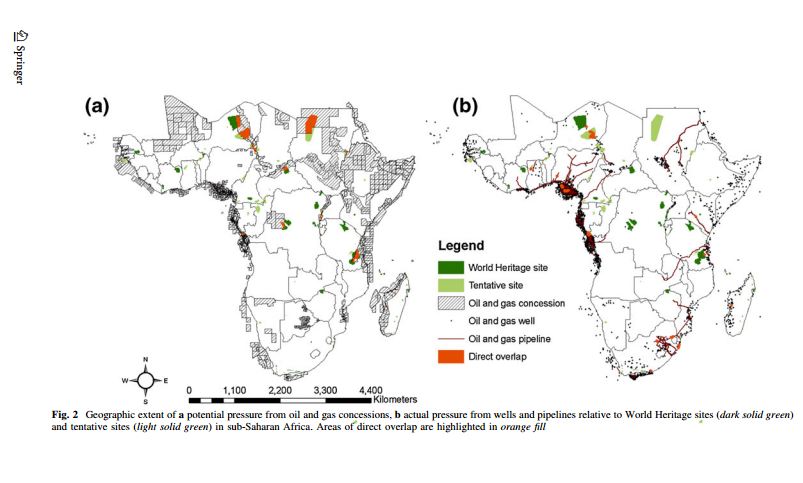 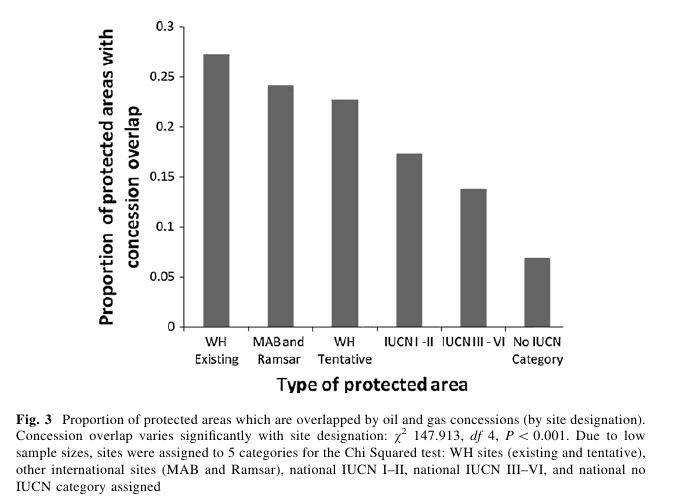 Direct impacts during the exploration phase include deforestation for exploration access routes (Epstein and Selber 2002) and opening of forest canopy along seismic lines, drop zones, and helipads (Thomsen et al. 2001). During the drilling and extraction phases, direct impacts include soil and groundwater contamination; losses in species richness and diversity in both oil and gas development (Godfrey et al. 2004) and oil spill impacted areas (Osuji et al. 2004); and hydrocarbon, water and mud discharge (Epstein and Selber 2002). Indirect impacts to surrounding habitats and ecosystems from road networks created for oil and gas installations can also be substantial; roads built for oil and gas exploration are often used by the logging industry and bushmeat hunters, thus increasing both wood extraction rates and the duration of the logging season (Grau and Brown 2000), and hunters’ access to previously remote areas of forest (Thibault and Blaney 2003).