Conflicts between Local communities and Oil Companies: all what can go wrong… 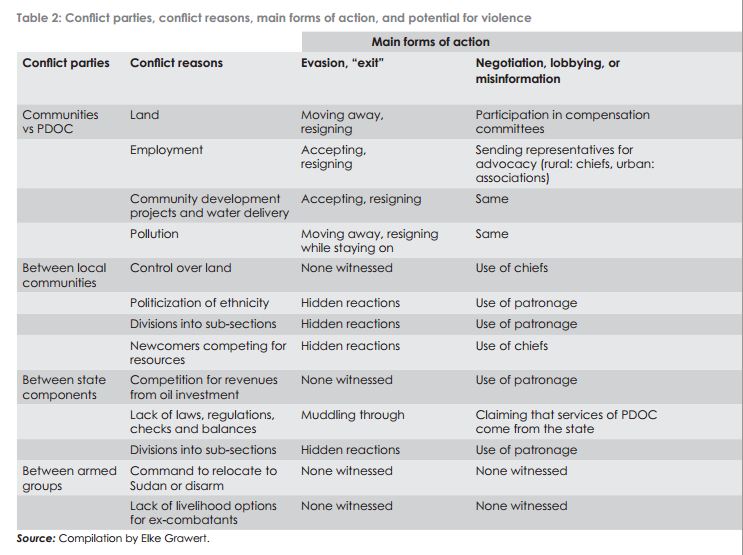 Conflicts about land and compensation for expropriation: Oil exploration and production requires large land areas, which, during the war, had been “cleared” in proxy wars by militias allied to the GoS, through displacement and killing. “There was a lot of displacement in the area once, even forced displacement of pastoralists from grazing land, then pollution, due to poor technology” (int. Ndura, 2011; cf. also Bol, 2012, pp. 4–8). The Deputy Commissioner of Melut County explains:

Land. They want to remove people from the land. They said the land is no man’s land, the Chinese. We have to talk to them that the land is ours. Now we have come to the point that they must give us benefits. They built two schools, but the population is increasing with people from the north. When they are exploring, they need to pay compensation (int. Nyok, 2011).

These statements reflect the perception of politicians that it is the Chinese who expropriate the land. They neither blame the whole oil corporation, which consists equally of Chinese and Malaysian shareholders, nor the GoS for this. The implicit demand for more schools as a means of compensation for using the land comes from the Deputy Commissioner and is directed at the oil company. Yet, in fact, it is one of the local government’s main tasks to supply the county with schools and not the oil company’s.

Conflicts about employment: High unemployment rates amongst young men have been one of the  drivers of armed conflicts in several parts of South Sudan after the CPA. The “almost complete absence of livelihoods and infrastructure combined with a hugely disempowered male population with little formal education and few marketable skills” (McEvoy and LeBrun, 2010, p. 20) left young men without a proper role in society. Many, also in Melut and Maban Counties, grew up in a culture of looting and violence during the war. Members of the Goldora youth group for example recounted how, growing up during the war, they only learned how to fight and did not develop any other skills (int. Goldora youth group, 2011). Education, training, and qualification opportunities hardly exist in most parts of South Sudan including Upper Nile State—the precondition for a culture of learning and hard work to make a living. The war history and the militarization of the population put the society at risk to relapse into violence, if no effort is taken to develop peaceful skills among the youth (cf. Grawert, 2012, p. 85). The high numbers of immigrants, some of them holding certificates from abroad, increase the competition for jobs dramatically. This exacerbates the risk of violence and creates the potential for new patterns of tension and conflict between locals and newcomers.

Conflicts about community development projects and water delivery: PDOC was aware of the need to provide community development in the oil fields, as the Public Relations Officer confirmed. “When you develop oil in the field, you must bring help to the locals. Build a school, a hospital. Every year, a party or celebration …, water wells, water treatment and land projects” (int. Zhangming, 2011). The Officer added that PDOC did not establish such projects after direct communication with the communities, but that the procedures for community development projects involved several levels of the government. Each project required an agreement between PDOC, the Commissioner, and the local authorities. According to the EPSA, special funds PDOC set aside for community development projects, local infrastructure, and service supply had to be approved by the Minister of Petroleum and Mining (int. Zhangming, 2011; cf. Chapter 2). The Head of the Parliamentary Committee for Petroleum and Mining and the Vice President of PDOC called this “compensation money” (int. Odwar; Ajang, 2011).

… According to ECOS, PDOC had used the dependence of local people on the water supply through PDOC hired trucks as a lever and a disciplinary measure and “cut the supply if there [was] any problem with the local community, for instance when there were tensions over jobs in January 2006“(ECOS, 2008, p. 33).

The new Field Manager confirmed that the water in the containers was not safe and that sometimes the transport company would use water directly from the White Nile. He claimed that the new DPOC management would solve this by connecting the villages to the water purification plant with pipelines and considered this even to be cost-effective in the medium term (statement by Majak Bilkuei during the workshop in Juba, 2012).

With the control over drinking water supply, PDOC has acquired a position of power over the communities. Besides faint complaints about the bad quality of the water and the occasional roadblock in protest, local inhabitants of Melut County have not taken any action. Instead, they gradually moved closer to the roads to benefit from these water supplies. The oil company in turn benefited from the space where villages had been abandoned to conduct further exploration without any disturbance (visible on satellite images, cf. Mager, 2013). Connecting the villages to a water pipe is likely to have the same effect. The argument of cost-effectiveness does have a point in this case.

Conflicts about water pollution: The ponds for bioremediation are a source of conflict between the oil company and the communities. While the Field Manager of PDOC maintained that the pools did not spill over during the rainy season, several inhabitants of the adjacent communities and Melut town claimed that the oil ponds had caused severe environmental problems (int. Nyok,women’s group of Goldora; cf. also Bol, 2012, p. 30). When the pool overflows during the rains, the people “begin to shout, it is not good for people’s health, sometimes, people die …” (int. Nyok, 2011). The Deputy Commissioner stressed: “We are peaceful in this area” (int. Nyok, 2011). The Chiefs of Paloic reported that the adjacent fields were flooded with oil-polluted water and that the bad water had destroyed the trees. They also stated that the people were very angry, but did not show it (int. Chiefs of Paloic, 2011).