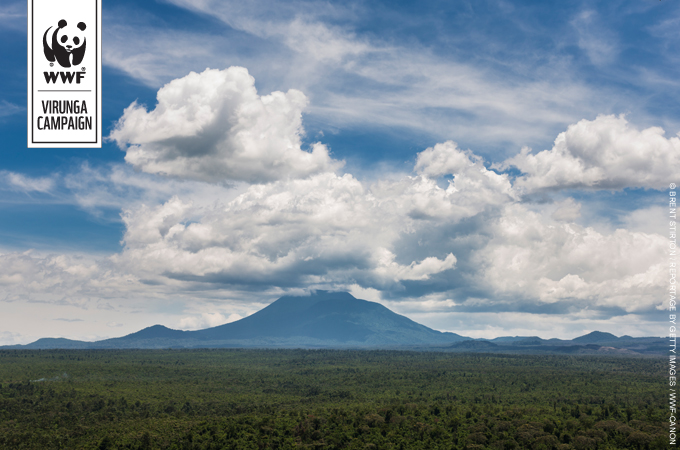 Virunga National Park, Africa’s oldest national park, could be of huge long-term value to local communities – if oil extraction is kept out. That’s the conclusion of the new Dalberg report published today. UK company Soco International plc is intending to explore for oil inside this precious World Heritage Site. That’s why we’ve launched a campaign to Draw The Line, to keep oil exploration out of Virunga National Park.

Today’s report, ‘The Economic Value of Virunga National Park’ (produced for WWF by independent development advisors Dalberg), makes it clear exactly how many ways the natural world is beneficial for us all. And it puts a financial value on that benefit.

It calculates that Virunga National Park, in Democratic Republic of the Congo (DRC), could be worth around $1bn a year – if it’s developed sustainably, rather than given over to potentially damaging oil extraction.

This total value includes direct sources of revenue (which could be over $400m) and jobs provided by nature – mainly via environmental tourism (forest-trekking and gorilla-spotting), but also sustainable fishing and hydro-electric power. There’s potential for many thousands more jobs in Virunga if these industries are carefully developed and managed.

There’s also the value from other, less direct kinds of ‘eco-system services’ – like the fact that the forests naturally prevent soil erosion and regulate the climate.

The park itself is seen as an important source of stability and community coherence in a region where historically there’s often been poverty and social unrest.

Have a look at this beautiful short film, which captures heartfelt personal reflections on Virunga – the “mother of parks in Africa”…

There’s also a very significant ‘non-use’ worth to Virunga, calculated at up to $700m. That’s based on the value people place on aspects of the natural world, whether or not they use them personally, or benefit from them directly, or even see them.

There’s an undeniable value in simply knowing that a beautiful wild place, or precious natural resource, or rare animal species exists somewhere. And knowing future generations might enjoy or benefit too. There’s also no denying the loss we’d experience if those prized and irreplaceable things ceased to exist.

That’s a big part of why Virunga National Park is valued so highly.

So we’re deeply concerned about the prospect of oil drilling in a place that was once, rightly, considered ‘off-limits’. Not just because of the potential impact on Virunga’s wildlife and environment, but on local people and livelihoods. DRC is a conflict-prone area too, which has already been damaging to the country’s tourism and other businesses.

And as we’ve seen elsewhere, oil exploitation can have negative consequences for communities, economies and political stability.

Today is the start of our campaign to Draw the Line and keep oil exploration out of Virunga National Park.