This paper is Part One of a four part series on business, human rights and oil in Uganda:

Environmental, ecological and wildlife concerns are closely linked to human rights, and are often affected by oil extraction. Human rights and the environment are inextricably linked and the right to a healthy environmental  is recognised in Article 24 of the African Charter on Human and Peoples’ Rights.129 Such concerns can determine the long-term ability of Ugandan nationals to enjoy their land, live in health, enjoy a sustainable future, and benefit from the income that land and tourism bring. Among other instruments, Uganda is a party to the Vienna Convention for the Protection of the Ozone Layer, the United Nations Framework Convention on Climate Change and the African Convention on the Conservation of Nature and Natural Resources.

Environmental issues currently facing Uganda include the draining of wetlands to support agriculture, deforestation, overgrazing, soil erosion, water hyacinth infestation in Lake Victoria and widespread poaching.130  Once oil production begins it is probable that new ecological issues will arise, or existing ones will become complicated or entrenched.

For example, Uganda’s Murchison Falls National Park contains the oil wells Jobi I and II.131 At 3,840sq km the park is Uganda’s largest, containing buffalos, elephants, lions and leopards, and stretches along the Victoria Nile. Uganda’s 1996 Wildlife Act is being amended, and in order to address the presence of the 31 oil wells that lie within protected areas, policies are being altered. Previously, mining was not allowed in protected areas, however updated rules propose to allow this, provided that appropriate environmental impact assessments are done.

As James Lutalo, the Commissioner in charge of reviewing the Act has stated: “We are creating a provision that harmonizes the activities of oil and gas together with wildlife conservation because when the law was made, oil and gas wasn’t an issue. So, we are providing for coexisting of sustainable wildlife conservation and extraction of oil…. Oil has come and it will have to be extracted. What we want is to minimize the damage it will cause. We are legalizing it so that activities can take place in a legal framework.”132 In Murchison Falls National Park, the Wildlife Conservation Society notes the vulnerability of this surrounding environment in the context of the energy industry’s development and has expressed concern over the park’s biodiversity and sensitive ecoystems.133

Environmentalists have also been worried about how the inevitable waste products of oil production will be dealt with. This waste includes the mud and rock removed when wells are drilled, chemicals used to assist drilling, and the water and mud that become mixed with oil when forcing the oil out of well. According to Frank Muramuzi, Executive Director of the National Association of Professional Environmentalists, “All the requirements for environmental management must be in place and properly understood before petroleum production starts. Currently, we do not have the facilities, frameworks and mechanism to handle any oil waste.” The government has stated that they have advised companies to use environmentally friendly practices, and NEMA has put some simple guidelines in place, but the latter are, according to Muramuzi, not detailed or strong enough. 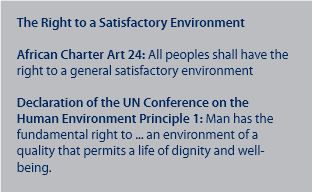 Oil spills can have a devastating impact on the environment. Positively, in April 2013, The national Environmental Management Authority (NEMA) announced that they had drafted an oil spill contingency plan. The plan focuses on putting in place measures to avoid an oil spillage, but also included detection mechanisms and a quick alert system in case of a problem.134

Oil production will inevitably have a profound impact on livelihoods in Uganda; as the section covering economic impacts outlined, it will be impossible for Uganda’s economies, both informal and organised, not to be heavily impacted by emerging oil sector. Some of these, like agriculture, may be affected by economic shifts, whereas others, such as fishing or tourism, may be affected by the physical presence of production. Other livelihoods and community dimensions impacted will likely include livestock rearing strategies, hunting and ecotourism.139 22% of the communities around the Albertine Graben whose livelihoods will be affected earn less than UGX 50,000 per month (about USD 20); in Acholi and West Nile, 37%. With such levels of poverty in the region comes a lesser resilience to shocks or abrupt changes in livelihood.140 It is therefore all the more important to consider how local communities may be affected by oil.

Morrison Rwakakamba, working for the think-tank Agency For Transformation, focuses with particular concern on the impact that oil will have on smallholder agriculturalists. Around 70% of Ugandan households are engaged in farming, therefore he described how, should the ercentage of Ugandan agriculturalists contributing to GDP reduce, a high amount of the population would not be engaged in a meaningful productive activity.141 He also expressed concern regarding an increasingly high proportion of wealth being in the hands of a smaller segment of the population.

Tourism is another industry that could be severely affected. The oil rich region is home to premier tourist destinations, including the Queen Elizabeth, Murchison Falls and Semiliki National Parks.142 Fishing communities are another group who could be affected. Already amongst the most marginalised groups in Africa, they may lose their livelihood and income if unable to access water blocked by oil platforms or oilrigs, or forced to move away fromtheir land. International Alert’s research in the Albertine Graben reports that oil exploration had a clear effect, with 54% of respondents perceiving an increased restriction on fishing activities.

143 In the Hoima and Bulisa districts, women’s livelihoods are being affected. A large portion of women in these districts earn money by cutting grass for thatching people’s houses in the remote areas of Kaisotonya and Sabagoro near the shores of Lake Albert. Uganda’sDaily Monitor has reported, “Security agencies led by security groups and the army guarding oil wells sometimes block communities from frequently accessing the park to pick grass because it is located near the oil wells. People found cutting grass are beaten and chased away from these areas.”144

Furthermore, whilst government attention was previously focussing on illegal fishing, once this was no longer a dominant focus of concern such illegal activity rose to higher levels, greatly reducing fish stocks in Lake Albert and taking the other main source of income away from the region’s women – fishmongering.145

This situation has improved, with lobbying for two days’ access to the park for the women, and civil society organisations promoting alternative businesses such as bee keeping. However it is clear to see how easily subtle changes profoundly affect whole communities.

Fishing is a form of livelihood for many Ugandans living around Lake Albert. International Alert have already found that 54% of residents around the Albertine Graben have perceived an increased restriction on fishing activities.