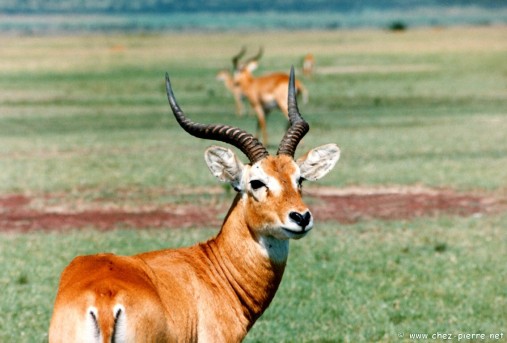 The first aspect to consider is whether the right to health and wellbeing of citizens and the protection of the environment is included in the Constitution of each country, as these instruments provide direction for all subsequent policies and laws. Most of the Constitutions of the countries considered give an inalienable right to health, wellbeing and environmental protection, but these rights are conspicuously absent from the Constitutions of Botswana, Zambia and Zimbabwe. Even though these rights are afforded through a variety of policy instruments and visions in these three countries, this does not rectify the constitutional position, as a vision or policy is not a legal document.

Where the constitutional rights to a healthy and clean environment have been articulated, they have been given effect through a variety of national environmental action plans, visions and strategy documents compiled for each country.

“The assemblage of all natural and man-made elements and the biological and geochemical systems in which they operate, as well as economic, social and cultural factors which promote the existence, transformation and development of the milieu, living organisms and human activities”

The Democratic Republic of the Congo (DRC), formerly the Belgian Congo and then Zaire, is the largest country in the Southern African Development Community (SADC) region. It is endowed with abundant, valuable natural resources, including diamonds, cobalt, copper and petroleum. The DRC was a colony of Belgium from 1884 until 1960, when it was granted independence.

Since that time, the country has not known true democracy, as it has been riven by ethnic and civil strife, leading to political and economic instability. At the time of independence, the DRC was in a state of extreme underdevelopment, which has been aggravated by the continuing armed conflict within and outside of its borders.

The move towards democracy started when a transitional government was set up in July 2003, with Joseph Kabila as President. Four Vice-Presidents represented the former government, former rebel groups and the political opposition. The transitional government held a successful referendum in December 2005 to accept a new Constitution, and elections for the Presidency, National Assembly and provincial legislatures were held in 2006. Kabila was inaugurated as President in December 2006 and re-elected after a contested general election in 2011.

• Every person has a right to a healthy environment, which is favourable to his/her full development.

• The environment must be protected.

• The state must look after the protection of the environment and the health of the people.1

Article 123 of the Constitution makes provision for laws on, inter alia, the protection of the environment, the sustainable development of the natural resources of the country, and pollution prevention. Article 203 allows for cooperative governance by central government and the provincial administrations ‘to protect the environment, natural sites and landscapes, and the conservation of such sites’.

The main international conventions, protocols and treaties relevant to environmental management are summarised in Table 1.7. 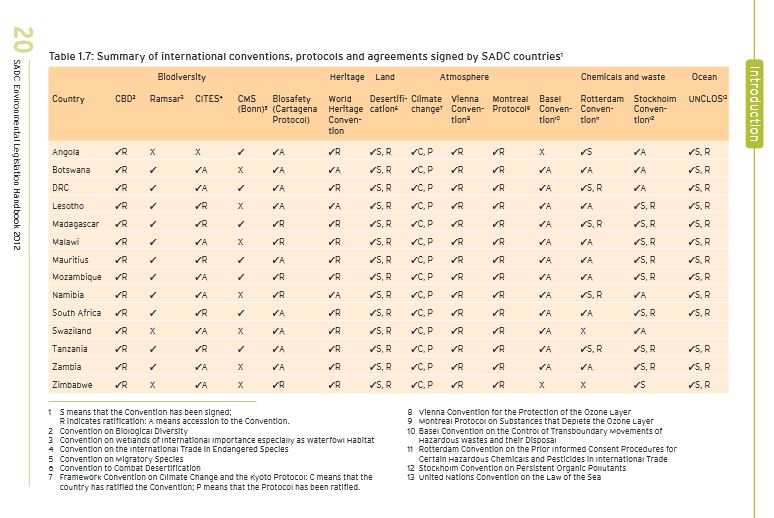 DRC has signed and ratified all conventions and accepted the World Heritage Convention and the Protocol on Wildlife Conservation and Law Enforcement. This protocol is an interstate regulation affirming that member states have the sovereign right to manage their wildlife resources and the corresponding responsibility for sustainable use and conservation of these resources. The aim is to establish a common framework for the conservation and sustainable use of wildlife resources in the SADC region and to assist with the effective enforcement of laws governing those resources.

View this document on Scribd