The Africa Progress Panel (APP) consists of ten distinguished individuals who advocate for equitable and sustainable development for Africa. Kofi Annan, former Secretary-General of the United Nations and Nobel laureate, chairs the Panel and is closely involved in its day-to-day work.

This article is an excerpt of the last African Progress Panel’s report, Grain Fish Money Financing Africa’s Green and Blue Revolution. While there are many differences in the challenges posed by marine and inland fisheries _ like Lake Edward in Virunga National Park, there are also important similarities and lessons to be learned:

1 / No less than non-renewable petroleum and metals, Africa’s renewable fishery resources and forests are a potential source of wealth and opportunity.

But in the absence of effective national institutions and international cooperation, Africa’s forestry and fishery resources are consolidating the power and personal fortunes of ruling elites, and enriching foreign traders. As with oil and minerals, governments across the region need to take responsibility for stopping the plunder of public assets – a task that most have failed to address.

3/ Unlike the mining and petroleum sectors, fisheries represent a critical source of employment, trade and food and nutrition security.

In West Africa, up to a quarter of jobs are linked to fisheries, and the sector provides essential proteins, minerals and other nutrients to the diets of the region’s people. Up to two-thirds of all animal protein eaten by people in coastal West African states is fish.(10) Meanwhile, artisanal fishers are linked to consumers through a vast intra-regional trading network in which women play a central role.(11) Apart from draining the region of revenue, overfishing is reducing fish stocks, lowering artisanal catches, harming the marine environment. It also is putting the livelihoods and food and nutrition security of millions of people in West Africa at risk.

African governments have primary responsibility for policies that maintain fish stocks while enabling their people to benefit from them. But Africa’s capacity constraints mean it is crucial to strengthen international cooperation in defense of marine ecology and sustainable fisheries, which are vital global public goods. 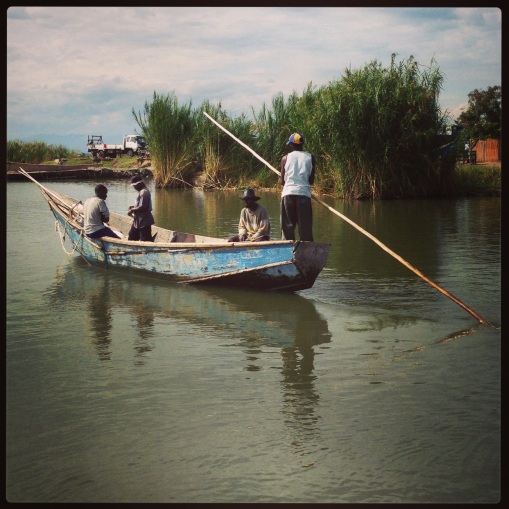 Lake Edward is one of the many lakes in Central Africa’s Rift valley. Its waters spread across the neighboring countries in the region. The Lake is fully enclosed in Virunga National Park (Virunga), which is found in the Democratic Republic of Congo (DRC), and in Queen Elizabeth National Park (QENP) that is located in Uganda. The DRC considers the Lake’s waters as a part of its national park, while Uganda considers the Lake separately from the national park.

The recent WWF study on the Economic Value of Virunga showed that Lake Edward’s “ﬁshery industry employs approximately 27,000 ﬁshermen. The annual production is around 22,000 tons, of this 15,000 tons comes from Lake Edward. At an average market value of US$2 per kilogram, this represents a US$30 million industry… By introducing sustainable management systems, such as boosting ﬁsh populations through rebuilding the hippopotamus population and enforcing policies like those controlling net mesh size, the current yield could triple.58 At a conservative stable market value per kilogram, this will bring the value of Lake Edward’s industry to US$90 million annually. The industry could generate more than 28,000 jobs in ﬁshing and related activities such as smoking, drying, transportation and resale.59” Source

This is in line with one of the main pillars of the large-scale program to sustainably and efficiently harness Virunga National Park’s huge economic development potential called Virunga Alliance.