‘Drillers in the mist’: How secret payments and a climate of violence helped UK firm open African national park to oil 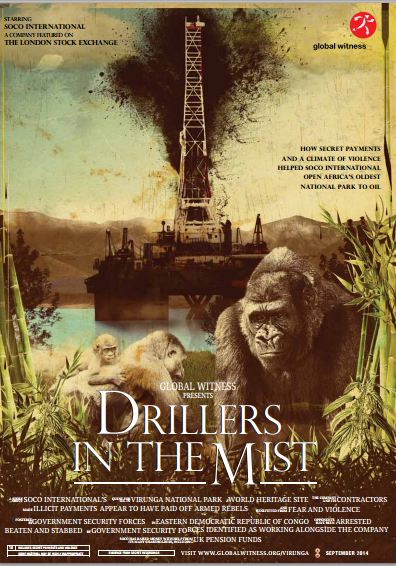 British oil company Soco Internationaland its contractors havemade illicit payments, appear to have paid off armed rebels and benefited from fear and violence fostered by government security forces in eastern Congo, as they sought access to Africa’s oldest national park for oil exploration.

The shocking behaviour of one of the UK’s 200 largest public companies is laid bare in a new report released today by Global Witness. Our findingsare based on undercover recordings gatheredin the Democratic Republic of Congo as part of an investigation by UK film-makers, which have been reviewed by Global Witness.

The material was gathered in the course of research for the feature-length documentary Virunga but only some of it features in that film, which will be released on Netflix in November.The material includes audio and video recordings by a court-appointed investigator, community activists and French freelance journalist Mélanie Gouby.

Among the most startling evidence in the recordings are: a Congolese intelligence officer closely allied to Soco offering a park ranger thousands of dollars to spy on the chief warden of Virunga National Park, Emmanuel de Mérode; a senior Soco official and one of the company’s contractors appearing to admit that Soco paid rebels; and a local MP admitting to having received monthly payments from Socofor lobbying in favour of the company.

Activists and park rangers who criticised Soco’s operations have been arrested, and in some cases beaten or stabbed, by soldiers and intelligence agents supporting Soco’s entry to the region. Some of these cases are described in our report and were also documented independently by Human Rights Watch in June this year.There is no evidence that the security forces in questionwere acting on instructions from the company.

Soco has yet to find oil in the park. Following sustained pressure from campaigners, it pledged on 11 June that, after completing seismic testing, it would not “undertake or commission any exploratory or other drilling within Virunga National Park unless Unesco and the DRC government agree that such activities are not incompatible with its World Heritage status”. The ambiguity of Soco’s position leaves the door open to the park being fully or partly declassified for oil. This was underlined by a report in the Times on the day of the announcement, where Soco Deputy CEO Roger Cagle said Congo and Unesco could agree to redraw Virunga’s boundaries.

“Soco is threatening Africa’s oldest national park through an oil project marred by bribery, intimidation and violence,” said Nat Dyer of Global Witness. “Pension funds and other investors must demand that Soco quits Virunga for good and that it accounts for its actions.”

Soco denies the allegations in our report, saying that it “does not condone, partake in or tolerate corrupt or illegal activity whatsoever” and that bribes to park rangers “have never been nor will ever be sanctioned by Soco”. The company also said that it is committed to the protection of human rights and that it would investigate if there was evidence of wrongdoing.

Global Witness is calling on Soco’s shareholders – including Aviva, Legal & General and the Church of England – to tell the company to pull out of Virunga National Park for good and commission an independent inquiry into Soco’s Congo activities. This inquiry should look at allegations of corruption, secretive payments and the arrest and intimidation of opponents by Congolese security forceswho supportSoco.

We are also calling for authorities in the UK and the US to launch investigations into corruption allegations surrounding the company.

Virunga, where Soco has been exploring for oil, is home to a quarter of the world’s 880 remaining mountain gorillas and has more species of birds and mammals than any other African national park. Soco’s oil plans in the world heritage site have been opposed by many local community groups, Unesco and western governments.

De Merode, Virunga’s chief warden, survived being shot in the stomach and chest by unknown gunmen in April, shortly after handing in a report on Soco’s activities to the regional public prosecutor. Congolese authorities are investigating the shooting of de Merode, who had gained the hostility of many groups wanting to exploit the park, ranging from rebels and elephant poachers to supporters of oil exploration. Soco has condemned the attack and says “any suggestion linking Soco to this crime is completely unfounded”.

The shooting of de Merode was a stark reminder of the dangers facing those standing up for Virunga, where 130 park rangers have been killed since 1996.

The film Virunga relates the struggle of park rangers to protect Virunga in the midst of conflict. It has already won prizes in film festivals in the USA, Canada and Belgium, and received plaudits from Desmond Tutu and Richard Branson.