Skip to content
Ahead of the COP21 , this was in 2007, Dr Richard Leakey argued that conservation alone could not save threatened species such as the mountain gorilla. He called for action on humans’ needs as well, and the fight against global warming. 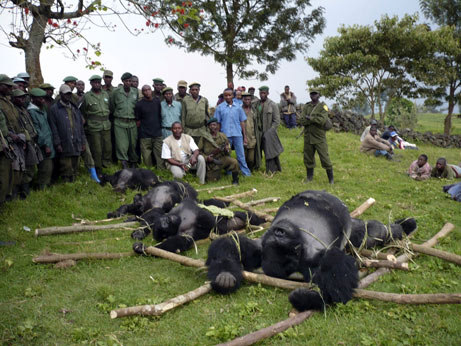 http://images.google.fr/imgres?imgurl=https%3A%2F%2Fseriousmonkeybusiness.files.wordpress.com%2F2010%2F12%2Fcongo-gorilla-masaacre.jpg&imgrefurl=https%3A%2F%2Fseriousmonkeybusiness.wordpress.com%2Fcategory%2Fnon-human-primates%2Fgorilla%2F&h=276&w=460&tbnid=ls1a4AQoNVX8UM%3A&docid=_IXDu3RcuQDzYM&ei=3otkVtjdJcGQaOiNsOgG&tbm=isch&iact=rc&uact=3&dur=155&page=1&start=0&ndsp=18&ved=0ahUKEwjYxPa5-8fJAhVBCBoKHegGDG0QrQMIMzAH
“Millions of people were horrified by the recent slaughter of mountain gorillas that dominated headlines for the inhumanity that seems to cling to this corner of the world.

In the space of a month, nine gorillas – more than 1% of the known population of these charismatic relatives of ours – were wiped out. All were from the Democratic Republic of Congo’s (DRC) Virunga National Park.

Predictably, the slaughter drew an outraged response. Wildlife conservation organisations leapt into action and began raising funds to deal with it, and a crisis team went in on the ground.

In the following four weeks, peoples’ compulsion to do something to save the species produced donations amounting to tens of thousands of dollars.

Living at the epicentre of the bloodiest conflict since the Second World War, the mountain gorillas share their habitat with heavily armed militia.

In other lawless regions, where wild meat comes into contact with hungry gunmen, species are slaughtered for food, or for trophies to be traded for cash and weapons.

But these deaths were repulsive for the fact that the gorilla corpses served no use to the killers.

On the contrary, it is the very presence of mountain gorillas in the Virunga National Park that threatens them, for the animals draw attention to an area that unscrupulous people would rather have us forget.

At the heart of the crisis is charcoal – the main form of household energy in Africa. And making charcoal means felling forests, destroying wildlife habitats, damaging ecosystem services such as water catchments and soil fertility.

Charcoal production has been going on for millennia, but recent events in eastern DRC have led to a sharp escalation in demand.

In neighbouring Rwanda, an enormous human population has stripped almost all its indigenous forests bare; while in the Congolese border town of Goma, refugees fleeing the region’s crises have swelled the population to more than half a million.

Together, they’ve created an insatiable demand for charcoal worth an estimated $30m (£15m) a year.

To save Rwanda’s few remaining forests and the gorillas that have become a major source of tourist revenue, President Paul Kagame has installed a surprisingly efficient and effective ban on charcoal production.

Ironically, however, that has driven the black industry across the border into DRC, threatening the habitats of the very same gorillas in the park which straddles both countries.

Given the lack of any form of effective government in eastern Congo, and the ludicrously small government salaries – a ranger earns about $5 (£2.50) per month – it is not surprising that the parks’ forests have become a commons and virtually everybody is involved in the scramble for resources, from peasants to high ranking government officials and rebel militia.

If gorillas focus unwelcome global attention on the park, it is hardly surprising that those getting rich on charcoal will want to remove that attention by getting rid of one of our closest biological relatives.

As shocking as the gorilla executions were, this is fundamentally a human tragedy, with very human solutions.

There must be alternative sources of energy to meet the demand in both Rwanda and eastern Congo. There must be a return to the rule of law in DRC, where the forests are saved for the long term good of all, rather than looted for the short term riches of a few.

It will take a focused global initiative to end the conflict, introduce alternative sources of household fuel, and create alternative livelihoods

Not only do we risk losing one of the most charismatic and important species on Earth, but we are in danger of doing more damage to the world’s warming climate.

In that respect, the forests’ destruction is a double whammy. Burning charcoal is one of the greatest sources of atmospheric carbon dioxide, but it also strips away the trees that otherwise soak up so much of the carbon dioxide in the atmosphere.

While the alarm has been raised by conservation organisations concerned about gorillas, and the global public has responded, it is clear that the problem is much greater than one of conservation alone.

This is a human development crisis and it will take a focused global initiative to end the conflict, introduce alternative sources of household fuel, and create alternative livelihoods for the population living in eastern Kivu.

If the underlying demand for charcoal is ignored and we focus too much on the gorillas alone, we will not only see the extermination of the mountain gorillas, but the forests, woodlands and all the unique species that inhabit this biologically diverse landscape.

We will also lose the climate mitigation services that the intact forests provide. In the end, we could see a human crisis that will dwarf the tragedy of nine gorillas.

Dr Richard Leakey is the founding chairman of WildlifeDirect, a former head of the Kenyan Wildlife Service and a leading palaeontologist