In the Footsteps of the Museum’s Virunga Gorillas*

Carl E. Akeley was an American naturalist and explorer. Her was also known as Carl Ethan Akeley, born in May 19, 1864 in Clarendon, New York. He Died in November 17, 1926 in Virunga National Park, Belgian Congo. He was buried only a couple miles away from where he encountered his first gorilla in 1921 (1). 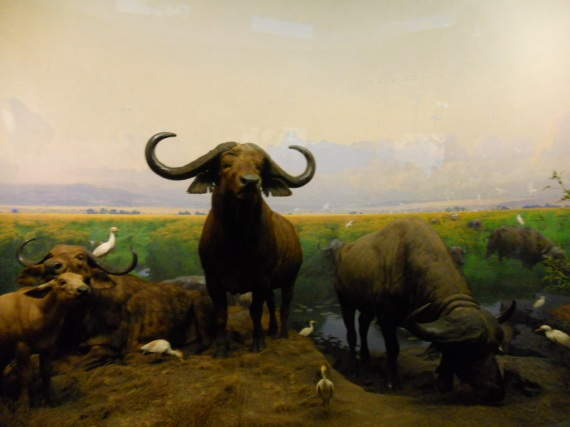 In 1921, eager to learn about gorillas to determine if killing them for museum dioramas was justified, Akeley led an expedition to Mt. Mikeno in the Virunga Mountains at the edge of the then Belgian Congo. At that time, gorillas were quite exotic, with very few even in zoos, and collecting such animals for educational museum exhibitions was not uncommon.

In the process of “collecting” several mountain gorillas, Akeley’s attitude was fundamentally changed and for the remainder of his life he worked for the establishment of a gorilla preserve in the Virungas.

In 1925, greatly influenced by Akeley, King Albert I of Belgium established the Albert National Park, (since renamed Virunga National Park). It was Africa’s first national park. Opposed to hunting them for sport or trophies, he remained an advocate of collection for scientific and educational purposes.[9]

It was here, on a 12,000-foot saddle between the Virunga’s Mount Mikeno and Mount Karisimbi, that a Natural History Museum expedition first led in 1921 by the renowned naturalist and taxidermist, Carl Akeley, captured the scene for one of the museum’s most well-known dioramas – an open meadow filled with lush Hagenia trees and wild celery, sweeping views of distant volcanoes and a group of five mountain gorillas. Source: In the Footsteps of the Museum’s Gorillas

Akeley began his fifth journey to the Congo with the start of the dry season in late 1926. He died on November 18 of fever and was buried in Africa, just miles from where he encountered his first gorilla, the “Old Man of Mikeno.”

Source: Wikipedia * with some extracts of Shane Dixon Kavanaugh’s article ” In the Footsteps of the Museum’s Gorillas“

We know that the safest place for a gorilla, an elephant or lion is its natural habitat – not a museum or a zoo, and that we need to do all what is possible in order to protect and restore their natural habitats for the benefit of all, nature and people.

We believe in the right of animals to coexist on our planet, and that the wilderness is Earth’s greatest treasure. We must all act now to save it. Damian Aspinall

SAVE it and come Visit Virunga and experience the wonder of encountering the beauty of Virunga’s nature and wildlife in real life!

HELP support the park in its conservation efforts. When visiting Virunga “30% goes entirely to the communities surrounding Virunga National Park, 20% is for conservation activities in Virunga National Park, and the remaining 50% goes to ICCN in Kinshasa to support the additional national parks and reserves in DR Congo that suffer from underfunding and a lack of resources” (2).