When Save Virunga started 5 years ago our aim was simple: to give a voice to local communities who depend on the survival of Virunga National Park for their livelihoods and to protect Africa’s oldest National Park from oil extraction. We believed that Virunga should be a place where no oil extraction and pollution occurs, a place where people develop sustainable livelihoods based on healthy and intact ecosystems.

Looking back at these 5 years we have realized that the fight for the survival of Virunga is not an exception, and the threat is much bigger than what we ever thought. Our fight should not only be about saving Virunga but protecting our “common home” and all these irreplaceable places and species that are disappearing at an alarming rate under extractive economies and the climate crisis.

Why should we sacrifice new areas if fossil fuels should not be extracted in the first place? (Source EJOLT) 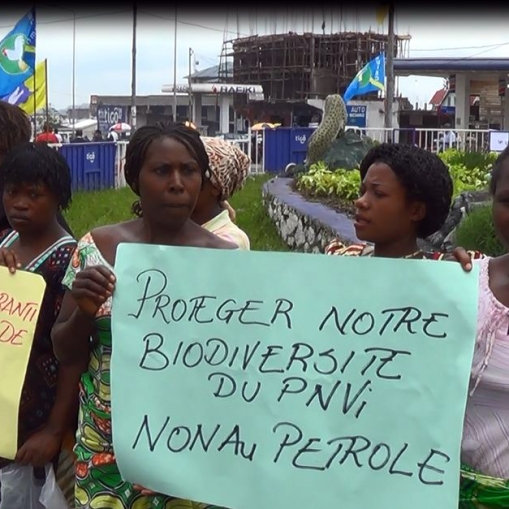 Communities ask the DRC Government among other things to respect the national and international laws that direct the environment(al) issues; to revise the contract signed between DRC Government and SOCO for the exploration and exploitation in Block V and let local communities participate in this revision process.

Many others have paved the way before us, organizations such as Environmental Rights Action/ERA in Nigeria and Acción Ecológica in Ecuador after decades of conflict with major oil companies because of flagrant human rights abuses and environmental impacts started to put forward the proposal to leave fossil fuels in the ground. In the last couple of years new movements have merged such as 350.org which is building a global climate movement and uniting many grassroots movements all over the world. They are all demanding the same: to stop all new fossil fuel projects.

Today if governments are determined to implement their climate policies and the Paris Agreement it is time for them to Keep the Oil in the Soil.

“Total proven international fossil-fuel reserves already contain about 3 times as much carbon, according to the International Energy Agency’ ‘World Energy Outlook’. Most of the reserves are owned by governments or state energy firms; they could be left in the ground by public-policy choice, i.e., if governments took their own policy objectives seriously. Exploring and exploiting new sources of fossil fuels now means to propel CO2 emissions above 550 ppm. It is an irresponsible waste of money, and policy is called upon to stop this squandering of resources.

Oil and gas extraction, and coal mining, even using the most modern techniques, will always be dirty business. There is no ethical, environmental or social justification for mobilising reserves with above-average environmental and social impacts, including deep sea oil, tar sands, or fracking for shale gas, destroying riverine delta ecosystems and other wetlands, densely populated farmland, biodiverse forests or coral gardens.”

EJOLT is a global research project bringing science and society together to catalogue and analyze ecological distribution conflicts and confront environmental injustice. More at EJOLT