When a place is designated a Natural World Heritage Site, it is a recognition that it has “outstanding universal value” and must be protected. But a new study shows many of these sites are being severely damaged by human activity and are deteriorating rapidly.

By any standard, Australia’s Great Barrier Reef is one of the wonders of the blue planet, half the size of Texas and home to 400 types of coral, 1,500 fish, and 4,000 mollusks. When UNESCO named it a Natural World Heritage Site in 1981, it praised the reef not just for “superlative natural beauty above and below the water,” but also as “one of a few living structures visible from space.”

Since then, half the reef’s coral cover has died, a victim of bleaching, predatory starfish, cyclones, and human disturbance. You might expect its World Heritage status, marking it as one of the crown jewels of the Earth, would elicit a worldwide campaign to protect and conserve it. Instead, in the face of intense lobbying by an Australian government intent on avoiding embarrassment, UNESCO’s World Heritage Committee declined in 2015 even to add the reef to its list of sites that are “in danger.”

To avoid apples-to-oranges comparisons — and cut through the politics and photo op-character of such designations — the research team examined sites through the lens of two newly available and “globally-consistent” data sets. The first, using high-resolution Landsat data, identified significant forest loss in 91 percent of forested World Heritage sites (together with a surrounding 10-kilometer buffer zone). The second data set indicated that Natural World Heritage Sites have a human footprint closer to farmland than to wilderness, based on a cumulative measurement of population, roadways, construction, agriculture, and other forms of development.

“We found that on average human pressure increased faster and more forest loss occurred in areas surrounding NWHS, suggesting they are becoming increasingly isolated and are under threat from processes occurring outside their borders,” the study concluded. Despite a few surprisingly stable exceptions, like Sinharaja Forest Reserve in Sri Lanka and Mana Pools National Park in Zimbabwe, the results “suggest many NWHS are rapidly deteriorating and are more threatened than previously thought.”

To the surprise of the researchers, the study revealed that North American sites accounted for 57 percent of all forest loss in Natural World Heritage Sites worldwide, “despite their protection and management being considered highly effective.” Canada’s Wood Buffalo National Park, for instance, lost 12 percent of its forest cover over roughly the first decade of this century, and Yellowstone National Park lost 6 percent — both “almost certainly” because of pine beetle outbreaks that have gotten worse because winters are no longer cold enough to kill back populations of these tree-killing insects. More predictably, unsustainable logging practices cost 5 percent of the forest cover around Russia’s Lake Baikal and 8 percent in Río Plátano Biosphere Reserve in Honduras. 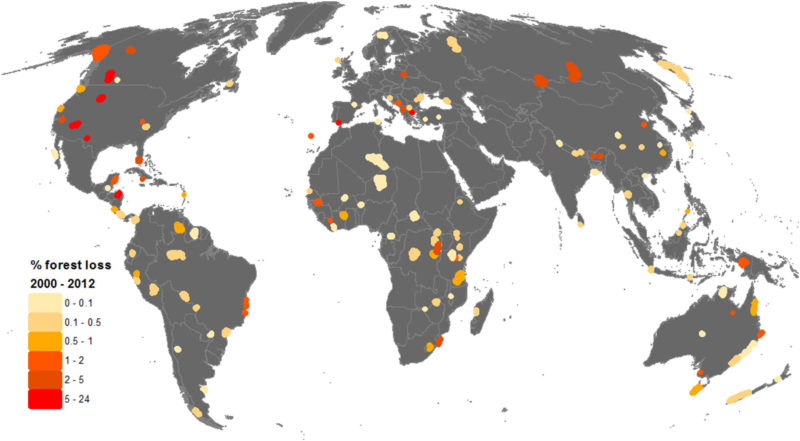 Percent of forest loss between 2000 and 2012 in Natural World Heritage Sites. Sites experiencing substantial forest loss (more than 5%) are shown in red.

Percent of forest loss between 2000 and 2012 in Natural World Heritage Sites. Sites experiencing substantial forest loss (more than 5%) are shown in red. ALLAN ET AL. 2017
“I think it’s great that nations identify these sites,” senior author James E.M. Watson, director of science for the Wildlife Conservation Society, told Yale Environment 360. “But because they don’t put any resources into protecting them, you can say it’s a publicity exercise. This paper breaks that open, because this is satellite imagery and independent data on human impact [that says], ‘This is what you are doing to your site.’” The intent, he added, is that “useful information that is independent of politics will feed into the process and embarrass nations — or not embarrass them, but get them to contemplate what they are doing to these sites.”

In one notorious case, for instance, Oman obtained World Heritage status in 1996 for its Arabian Oryx Sanctuary — and proceeded to turn over 90 percent of the sanctuary’s acreage to the oil and gas industry (with a corresponding decline in the oryx population, which fell from 450 to 65). In 2007, after just 11 years, UNESCO de-listed the Sanctuary, a first for a Natural World Heritage Site.

The purpose of the new study, said lead author James R. Allan, a doctoral student at the University of Queensland, isn’t to diminish the value of the World Heritage designation, which “carries a lot of weight” both as a national status symbol and as “a layer of international ‘green tape’” making it “that much more difficult for governments interested in short-term projects to damage these places.”

Nor is the study “trying to put the boot into UNESCO,” or its World Heritage Center, which has a paltry $6 million in the current fiscal year for monitoring and restoration work on an entire planet’s worth of Natural World Heritage Sites, including new ones being proposed for designation. UNESCO is also limited because its recommendations must be voted up or down by the World Heritage Committee, composed of representatives of 21 nations elected on a two-year rotation.

“Unfortunately, it’s becoming very political,” said Elena Osipova, who advises the World Heritage Centre as an ecologist for the International Union for Conservation of Nature, “and the decisions are taken not based on technical questions, but on negotiations. Where we see it a lot is with new proposed sites, and the expectations of everyone in the country,” because of the prestige of the World Heritage label and the potential for tourism revenue.

In 2016, for instance, the scientific recommendation was to delay designation of Western Tien-Shan in Central Asia, a transboundary mountain region noted for its spectacularly diverse wildlife. “Our concern was that there was very little cooperation” among the countries involved, Kazakhstan, Kyrgyzstan, and Uzbekistan, said Osipova. It still got designated a Natural World Heritage Site anyway, “and so far we haven’t heard from those countries” about any progress toward the mandatory joint management agreement of the site.

Accusations of excessive political influence on the World Heritage Committee went public in 2015, after Australia’s federal government spent a reported $300,000 lobbying to block the proposed UNESCO “World Heritage in Danger” listing for the Great Barrier Reef — plus another $550,000 to “manage the relationship” with the World Heritage Committee. Other countries have used an “in danger” listing as a tool to rally public support for needed improvements, for instance, when the United States requested that status for Everglades National Park. But some countries regard it as a blame-and-shame exercise. Australia, for instance, had previously blocked an “in danger” listing of another World Heritage Site, Kakadu National Park, despite uranium mining taking place there.

With the Great Barrier Reef, Larissa Waters, a senator from Queensland for the Greens Party, accused the government of “spending money on bribing the rest of the world rather than fixing the problem.” The threats to the reef include construction of two liquefied natural gas facilities within the World Heritage Site, and the attendant dredging of shipping channels. Development is also scheduled to begin this year of Australia’s largest coal mine, aggravating shipping impacts and climate change, both of which are already thought to be killing the reef. Even so, the World Heritage Committee ultimately voted not to add the Great Barrier Reef to its “in danger” list, after Australia committed to spend an additional $6.1 million “for enhanced reef monitoring.”

The Lake Baikal World Heritage site in Russia has lost 5 percent of its forest cover because of unsustainable logging practices. In an email, Mechtild Rössler, director of UNESCO’s World Heritage Center, countered that the committee had no basis for such a listing in 2015 because Australia had implemented its previous requests for changes. “Ports have been limited to four major ones,” she said, and the government has imposed a ban on dumping of dredge spoils throughout the reef. Just ahead of the World Heritage Committee meeting, Australia also released its Reef 2050 plan, which Rössler described as “one of the most ambitious plans ever made for any marine protected area on earth.”

In the same email, however, Rössler largely agreed with — and even elaborated on — the assessment of threats to Natural World Heritage Sites in the new Biological Conservation study. One way to begin to fix these problems, she said, would be to put more staff on the case: The World Heritage Center currently has just one permanent staff person, herself, and four temporary contract staff with advanced degrees in the natural sciences. Scientists should also play a larger role in delegations to the World Heritage Committee, she suggested. And major banks and other funding organizations need “better sensitization” to ways the dams, roads, mines, and other forms of development they finance can do damage to sites that are part of the natural heritage not just of the world, but of the individuals countries and economies in question. She also described “proper implementation of the goals of the Paris Agreement” on climate change, which the Trump Administration has renounced, as “indispensable” to the survival of many such sites.

Rössler did not dwell on one final irony. The World Heritage program was originally a visionary American idea, proposed to President Lyndon B. Johnson by Russell E. Train, a pioneering conservationist and later head of the U.S. Environmental Protection Agency. A subsequent 1965 White House conference called for a “World Heritage Trust” to protect “the world’s superb natural and scenic areas and historic sites for the present and the future of the entire world citizenry.” And it happened. Unfortunately, so did a series of on-again-off-again Congressional initiatives, beginning under the Reagan Administration, to suspend payment of dues to the United Nations, including UNESCO.

At the moment, said Melinda Kimble, a senior fellow at the United Nations Foundation, this country is in arrears to UNESCO to the tune of about $360 million. Simply paying that obligation could go a long way toward protecting Natural World Heritage Sites for the future. Unfortunately, the news from Washington D.C. appears to make it far more likely that the United States will turn its back not just on these crown jewels of the planet, but on the planet itself.
Richard Conniff
Richard Conniff is a National Magazine Award-winning writer whose articles have appeared in The New York Times, Smithsonian, The Atlantic, National Geographic, and other publications. His latest book is House of Lost Worlds: Dinosaurs, Dynasties, and the Story of Life on Earth. He is a frequent contributor to Yale Environment 360. MORE ABOUT RICHARD CONNIFF →