Extract from Global Witness last investigation on Uganda’s mining sector, a story on endemic corruption and mismanagement profiting at the expense of the Ugandan people, environment and economy. Almost half the world’s remaining mountain gorillas are at risk as mining threatens Bwindi and Rwenzori national parks, part of the famous Virunga ecosystem – this risks seriously damaging Uganda’s burgeoning tourism industry which depends on the county’s natural beauty and wildlife.

Uganda is rich in mineral wealth; the gold, tin, iron and other metals hidden in its soils could – if managed well – help drive development, provide jobs, and contribute to a healthy economy where citizens have access to basic services such as health, clean water and education. Unfortunately, the mining sector in Uganda is – and has long been – riven with corruption and dominated by vested interests.

Money and political power currently trump regulations designed to protect society or the environment and as a result next to none of the potential benefits are being seen by ordinary Ugandans. The corruption, mismanagement and impunity that characterise the sector are threatening some of Uganda’s last remaining wildernesses and the safety of workers.

The DGSM has already handed out Mining Exploration Licences in all but three of Uganda’s environmentally protected areas, of which there are 28, including some of the most bio-diverse according to the Mining Cadastre. 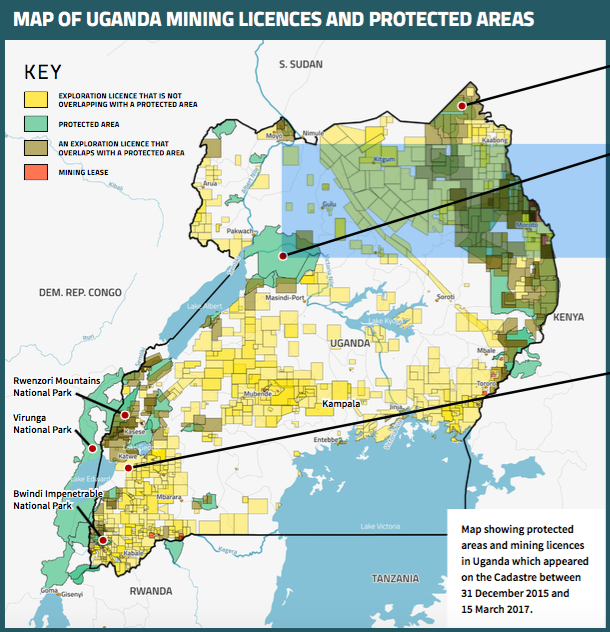 This includes the world-renowned Bwindi and Rwenzori UNESCO (United Nations Educational, Scientific and Cultural Organization) World Heritage sites, which form part of the Greater Virunga Landscape and are protected by international convention. Pressure on these areas is mounting and in some instances mining activity has allegedly already taken place.

Mining in these areas is incompatible with the UNESCO Convention Concerning the Protection of the World Cultural and Natural Heritage, to which Uganda is a signatory.2 It also poses a grave threat to the country’s most iconic species including endangered mountain gorillas, and to the emerging tourist industry, which relies on Uganda’s reputation as a wildlife hotspot.

The way licences are handed out is absolutely central to the management of the mining sector. If companies obtain licences corruptly neither they, nor the government Directorate that issued them, have any incentive to uphold the law or respect human rights or the environment.

Global Witness has been a leading force in a global campaign to prevent oil drilling in the Virunga ecosystem. The area represents a frontline for the conservation movement and the battle at UNESCO to protect World Heritage sites from oil and mining activities.

AN MP’S MINING LICENCE IN THE HEART OF BWINDI

Bwindi National Park, resting in the cloud-covered mountains on the border with the Democratic Republic of Congo (DRC), is a well-known bio-diversity hotspot. The UNESCO World Heritage site is a tiny sanctuary for one of the richest concentrations of mammals in Africa, including almost half the world’s remaining mountain gorillas.3 According to Uganda’s online Mining Cadastre over twenty companies and individuals have held mining exploration licences which lie at least partially inside the Bwindi World Heritage site or immediately adjacent to it.

Murchison Falls National Park hosts one of the few remaining populations of the endangered Rothschild Giraffes already under threat from oil exploration in the park. © istockphoto/1001slide

One licensee is NRM MP Elizabeth Karungi, whose story is emblematic of how well placed individuals claim to be able to use their political connections for personal gain. The woman representative for Kanungu District told Global Witness that she was able to carry out mining activities in Bwindi because the former tourist minister Maria Mutagamba was a “good good friend.” It is remarkable that the DGSM saw fit to issue her with a licence in this area despite the obvious threat to the wildlife there. In a letter to Global Witness dated January 2017, Mutagamba claimed that she did not know who Elizabeth Karungi MP was, however Karungi was on the Committee of Tourism, Trade and Industry which held meetings with the Minister during her period in office. The DGSM Commissioner told Global Witness that mining activities in national parks require the permission of the Uganda Wildlife Authority.

Map showing protected areas and mining licences in Rwenzori Mountains National Park which appeared on the Cadastre between 31 December 2015 and 15 March 2017.

Map showing protected areas and mining licences in Bwindi Impenetrable National Park which appeared on the Cadastre between 31 December 2015 and 15 March 2017.

The Rwenzori Mountains National Park is a popular tourist destination and contains endemic species such as the African Forest Elephant and the endangered Red Duiker.4 The area is also an important source of water for the Nile River. However, Uganda’s online Mining Cadastre shows that over twenty companies or individuals have held licences which lie at least partially within the World Heritage site or immediately adjacent to it.

One of these is the Tibet Hima Mining Company, which won a multi-million dollar contract to re-open the former colonial

Global Witness has seen a letter from Tibet Hima addressed to the Chief Warden of Rwenzori National Park dated 30th January 2015, in which they ask the park authorities for cooperation with their exploration efforts, including allowing them to work inside the park. The park authorities refused the request but the letter implies that the future of mining at Kilembe is dependent on exploration in Tibet Hima’s exploration licences which surround the Kilembe mine site and extend into the park.