Formal recognition would help protect those who increasingly risk their lives to defend the land, water, forests and wildlife, says the UN special rapporteur on human rights and the environment.

It is time for the United Nations to formally recognise the right to a healthy environment, according to the world body’s chief investigator of murders, beatings and intimidation of environmental defenders.

John Knox, the UN special rapporteur on human rights and the environment, said the momentum for such a move – which would significantly raise the global prominence of the issue – was growing along with an awareness of the heavy toll being paid by those fighting against deforestation, pollution, land grabs and poaching.

His appeal, the culmination of more than five years of investigations, comes amid a major push for the UN and member states to do more to protect those who defend the land, water, air, forests and wildlife.

“If we can’t protect them, then how can we protect the environment we all depend on,” Knox told the Guardian in Geneva, where he has just submitted a final report to the UN high commission for human rights.

For better and for worse, the issue of environmental rights has risen rapidly up the political agenda since Knox took his post. The number of murders of land and environmental defenders tracked by the monitoring group Global Witness increased to 197 last year, compared with 147 in in 2012.

But there is also increasing resistance from civil society, exposure in the media and support from the UN and some governments. Earlier this week, 24 Latin American and Caribbean nations signed a groundbreaking pact on environmental rights that – once ratified – will oblige governments to investigate and punish those accused of killings, many of whom currently evade justice due to impunity.

Even in Honduras – one of the worst offending nations – police have finally arrested the most senior suspect yet in the killing of the anti-dam and indigenous rights campaigner Berta Cáceres. Many activists believe this arrest would never have happened if not for the global outcry that followed that 2016 murder. More powerful suspects in the government, however, continue to evade justice.

On Tuesday, UN Environment launched an environmental rights initiative to scale up training of judges, prosecutors and police in environmental law and to work with companies to include human rights in investment planning.

Environmental protection and human rights were long considered separate issues, but they have been increasingly intermeshed, particularly over the past decade. More than 100 countries have laws that acknowledge the link, but dozens of countries – and the UN itself – have yet to formally recognise environmental rights.

How this might be done and what the effect would be remain to be seen. Knox suggested a UN resolution. Although this would not solve the problem by itself, it would increase pressure on governments to enact laws and policies to support, rather than criminalise, environmental defenders.

He proposes 14 “framework principles”, the first two of which interlock human wellbeing and ecological wellbeing:

Patrick Alley, co-founder of NGO Global Witness, welcomed the UN’s growing commitment to activists, community leaders, rangers and others who are defending the land and environment.

“This issue has moved far higher up the political food chain than before,” he said. “But it will get worse before it gets better. This is a vastly underreported issue.”

Knox said the next step should be to move to implementation, support for the most vulnerable groups and an increased focus on the role of business as well as governments.

That will largely be the work of his successor in an unpaid but increasingly important and high-profile post. In discussions about his replacement at the UN, some proposed the actor Leonardo DiCaprio, a prominent supporter of conservation issues.

Although the individual who takes the UN post is important, Knox said the bigger issue is the outside momentum that is pushing the institution to be more assertive on the environment. “I think this would have happened anyway. I’m just the stenographer describing what is happening,” the special rapporteur said.

“I was riding a wave as more and more states became interested in this issue. Unfortunately that’s because the problems are becoming more apparent,” he said.

The challenge is only likely to grow for his successor. 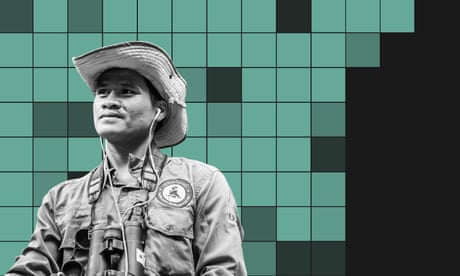 The defenders: recording the deaths of environmental defenders around the world