Drillers in the Mist: how secret payments and a climate of violence helped SOCO International open Africa’s oldest national park to oil. 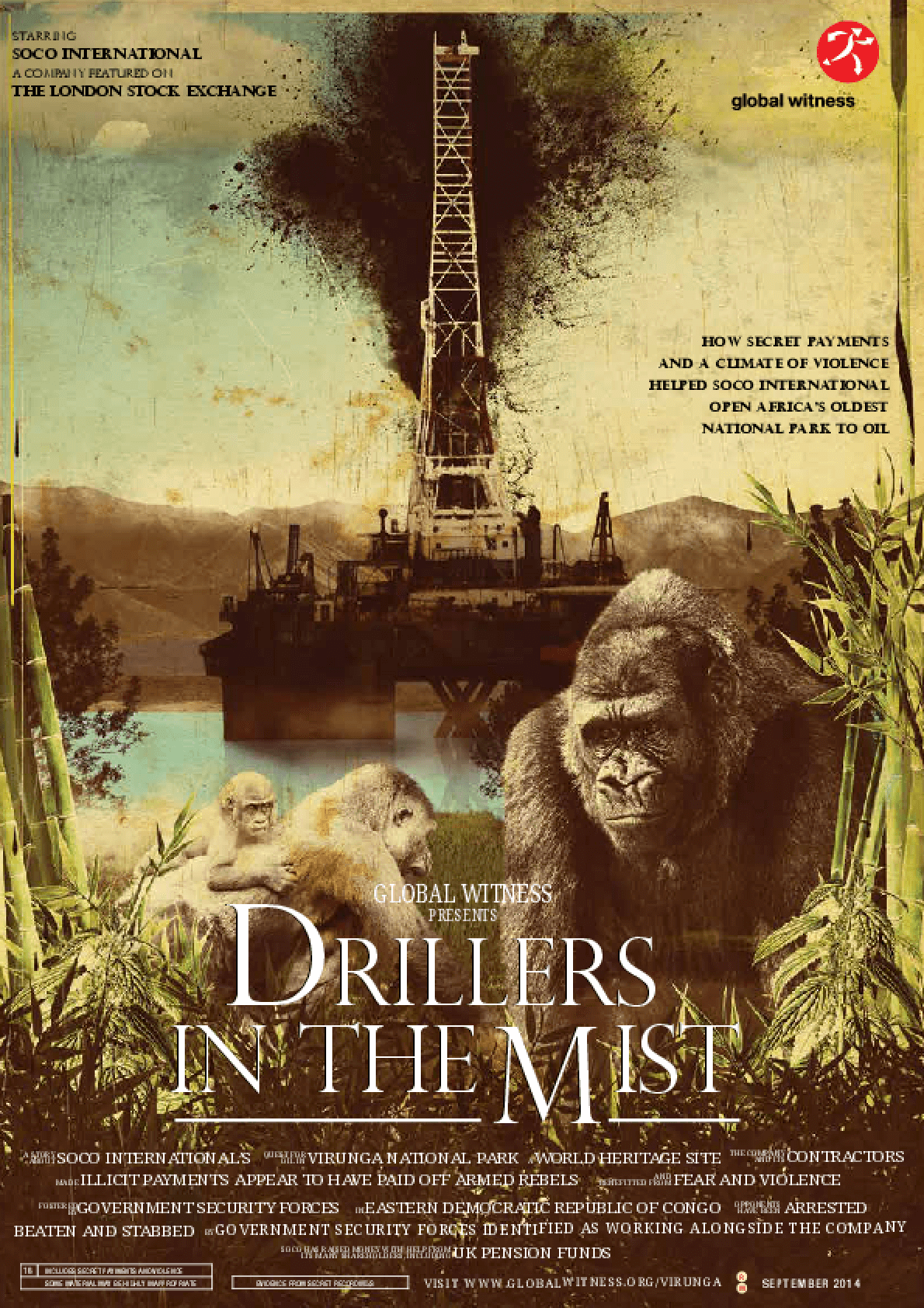 This emblematic case highlights how secret payments and a climate of violence in Eastern DRC helped SOCO International open Virunga National park, a UNESCO World heritage site, to oil exploration with financial support from its many shareholders, including European investors.

The International oil company signed the contract for the UNESCO World Heritage site in 2007 and it was ratified by presidential decree in 2010. As early as 2012, the Council on Ethics of the Norwegian Pension Fund recommended divestment from SOCO due to environmental concerns. Evidence published in Global Witness’ September 2014, Drillers in the Mist, showed that opponents of SOCO were arrested, beaten, and stabbed by government security forces identified as working alongside the company. This was enabled by an environment of corruption and impunity in which SOCO played an active role. SOCO and its contractors also appear to have paid off armed rebels. The Netflix documentary Virunga, which exposed SOCO International’s activities and the threats posed to the region, was premiered in April 2014 and appeared on Netflix in November that year.

The serious risks to one of the most important ecosystems in the world posed by oil exploration in Virunga park led to urgent calls for the protection of the park and the people that depend on it from the UNESCO World Heritage Committee, the British Foreign Office, The Belgian and European Parliaments and the International Crisis Group. It was feared that oil operations in this area would threaten endangered species, peace and stability in the region and the very existence of the national park. 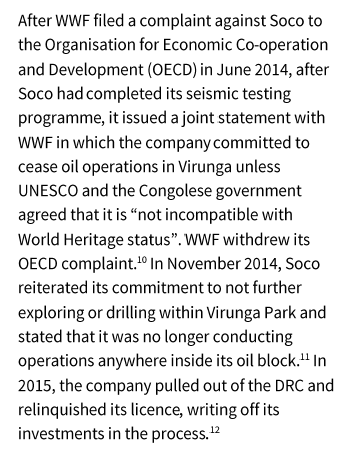 In June 2015, Global Witness published cheques showing that SOCO had paid tens of thousands of dollars to a Congolese officer accused of bribery and of brutality silencing opponents of oil exploration in the park. 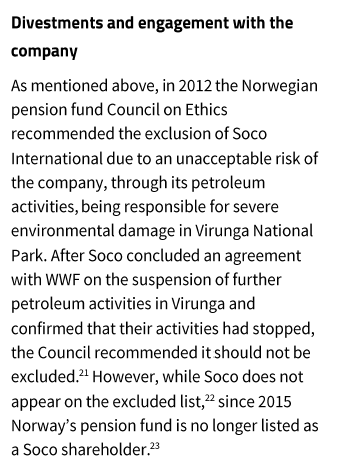 After Global Witness’ Drillers in the Mist report was published in 2014, Investec, a UK asset management company, reportedly withdrew their investment in SOCO in what it called, “the ultimate expression of discontent”, according to the Telegraph newspaper. Within 12 months the Church of England had also sold its £1.6 million stake in SOCO after the company failed to satisfy the Church with its response to the evidence of Human Rights abuses, bribery and corruption linked to its operations in Virunga National Park. Standard Life Investment told Global Witness that they had engaged with SOCO over many issues, including their activities in the DRC, and that “ our dissatisfaction with the company response…was a factors in us selling our actively held position.” However, Standard Life still holds a small “passively managed” shareholding in the company – meaning that their investments “either track an index or make automated investment decisions based on various factors.” 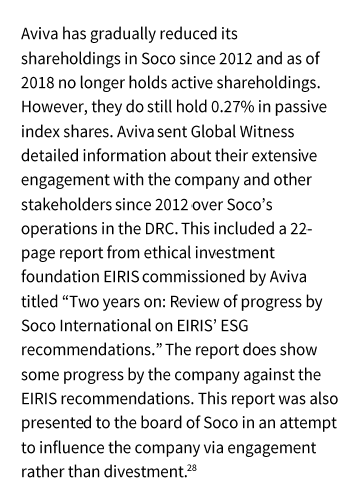 Aviva is considered to be one of the EU’s more progressive and ESG conscious investors and it is clear that they have considered ESG risks in detail and actively acted to improve company behavior. They have also done broader public engagement aimed at promoting the protection of areas of Outstanding Natural Values more generally.

Investors’ engagement with companies can be a powerful tool to improve behavior. However, there is a limit to what one minority shareholders can achieve on their own. The progress by SOCO reported in the EIRIS report is very limited, particularly when it comes to human rights and corruption related indicators, as opposed to environmental ones where progress was deemed better. The serious allegations made against SOCO should be a major red flag for any investors considering its investments in the company. They should seek clear reassurances from the company about future operations and monitor ESG risks carefully.

This case highlights the need for regulation to level the playing field for investors and set standards so that investors can work together to improve company behavior, rather than relying on individual conscientious investors to push for change alone.