Overinvestment in oil and gas creates risks for investors, regardless of whether the world is effective in tackling climate change. Either investors face assets being stranded as demand for fossil fuels falls in a transition to a low carbon economy, or the overinvestment contributes to excess emissions from fossil fuels, the failure to transition and the financial costs of a dramatically changed climate.

Read the blog, Big oil is set to spend $5 trillion on fossil fuels we can’t afford to burn.

This report assesses what the Intergovernmental Panel on Climate Change (IPCC)’s landmark report on 1.5°C means for the future of investment in the upstream oil and gas industry. By comparing data from the IPCC’s climate models with forecasts from industry analysts Rystad Energy, this report demonstrates the degree to which future production and capital expenditure (capex) is incompatible with limiting warming to 1.5°C.

Capital investment in new fields is incompatible with 1.5°C

Our analysis compared average oil and gas demand in the IPCC scenarios that are not reliant on high levels of future carbon capture or removal with industry production forecasts. It found that over the next decade: 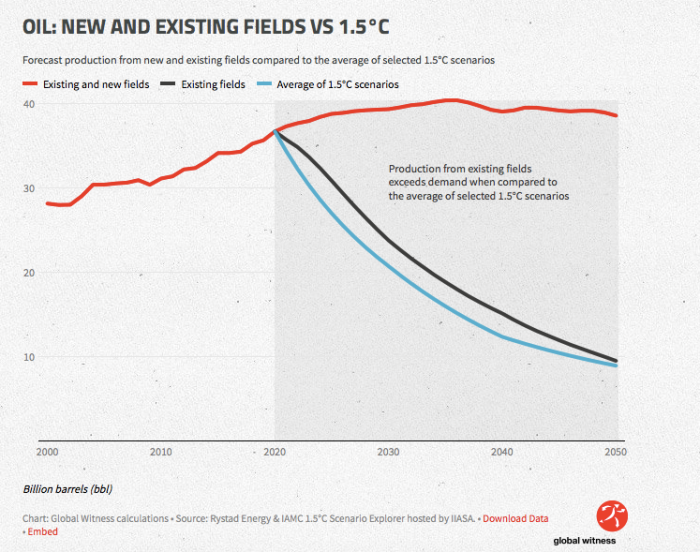 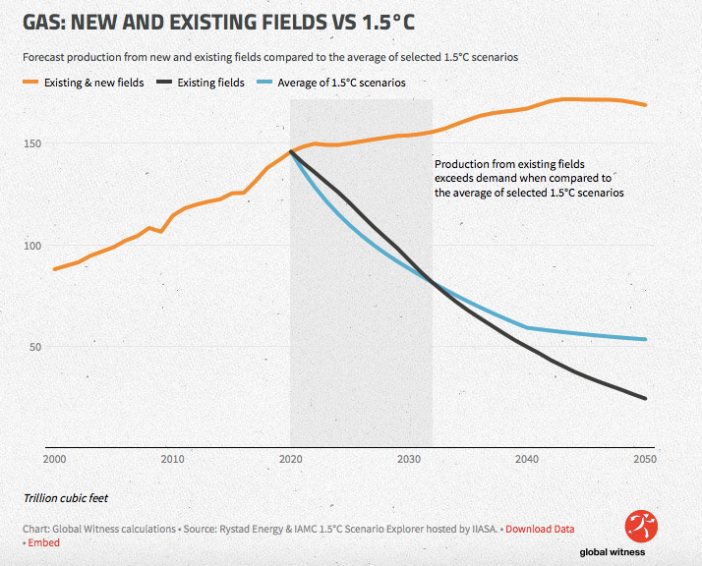 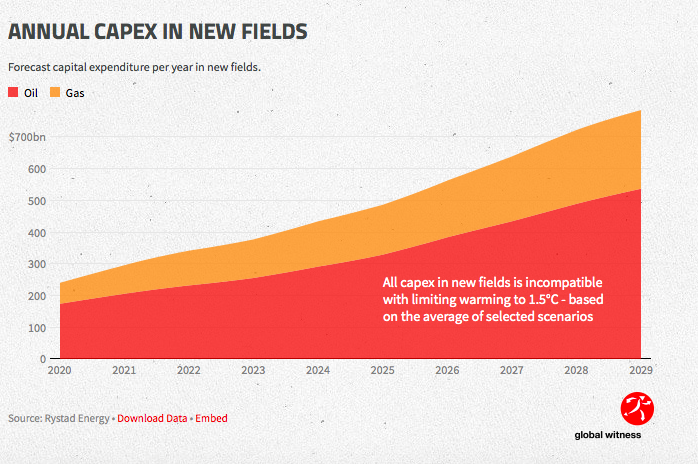 .
The oil and gas industry is at a crucial turning point. Capex has fallen by over a third since 2014, largely because of a slump in oil prices. Yet it is forecast to rise by over 85% over the next decade, reaching over $1 trillion a year. Two thirds of that investment is set to take place in new fields where development has not yet started and investments have not yet been sanctioned. Major capex projects that are forecast to be approved in new fields over the next decade include US domestic shale expansion, the Vaca Muerta shale in Argentina, the Kashagan oil field in Kazakhstan and the Yamal megaproject in Russia.

The oil and gas majors are set to lead this surge in investment, making up five of the ten largest investors in new fields over the next decade, led by ExxonMobil, Shell and Chevron. In light of our findings, this investment represents a potentially enormous misallocation of capital. 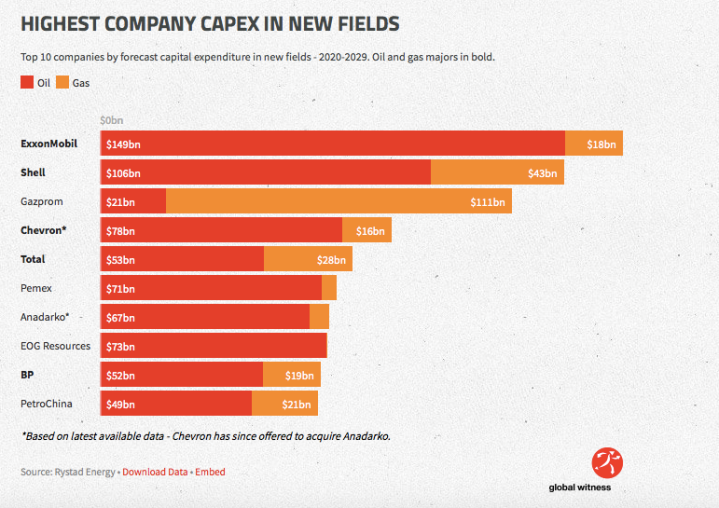 The risky gambles of carbon capture and removal technologies

This analysis focuses on IPCC scenarios that do not rely on high levels of future carbon capture or removal because of the significant risks associated with these technologies. Not least is the fact that neither of the main technologies modelled – CCS and BECCS – yet exist at a meaningful scale.

Despite considerable effort, including the commitment of $28 billion of public funds to CCS projects, there are only two operational in the power sector worldwide. Yet both use the captured CO2 to enable further oil extraction, in turn leading to further CO2 emissions.

While CCS has had negligible success to date, some climate scenarios rely on nearly as much CO2 being captured in the 21st Century as has been emitted worldwide since the Industrial Revolution.

CDR also plays a central role in many climate scenarios, yet the IPCC report repeatedly highlights the risks, uncertainties and limitations of CDR deployment at scale. It found that “CDR deployed at scale is unproven and reliance on such technology is a major risk in the ability to limit warming to 1.5°C”.

BECCS is one of the primary CDR technologies used in climate scenarios, yet a study for the leading intergovernmental body on carbon sequestration reported that large-scale BECCS deployment would “necessitate planting bioenergy crops on […] approximately one-third of the arable land on the planet”.

The IPCC report highlights concerns that raising expectations of “large-scale CDR deployment in the future can lead to an actual reduction of near-term mitigation efforts”; in effect building complacency that difficult decisions about short-term emissions reductions are not needed because of the future panacea of CDR.

Investors are using scenarios to assess the risks they face from the energy transition, in line with the recommendations of the Taskforce on Climate-related Financial Disclosures (TCFD). At present, they are at risk of substantially underestimating those risks by relying on scenarios that fail to limit warming to 1.5°C and rely excessively on carbon capture and removal.

The scenario most widely used by investors is the International Energy Agency’s (IEA) Sustainable Development Scenario (SDS), which the IEA claims is aligned with the Paris goals. However, analysis by Oil Change International has shown that the SDS can only be considered to be on track for 1.5°C – 1.8°C if it assumes the use of CDR technologies at levels considered unrealistic by both the IEA and the IPCC. In fact the SDS has the same emissions trajectory as the IEA’s previous ‘450’ scenario, which only gave a 50% chance of limiting warming to 2°C.

Oil and gas companies’ scenarios also include highly questionable assumptions about these technologies. For example, Carbon Tracker found that Shell’s 2°C scenario would require “some 10,000 large-scale carbon capture and storage facilities to be built over the timeframe (more than one every other day for the next 50 years).”

Such scenarios push the boundaries of plausibility and do not serve as a credible guide to alignment with the Paris goals.

The risks of overinvestment in oil and gas

This report’s findings have profound implications for the future of the oil and gas industry. Continuing investment on a business as usual pathway would massively increase the financial risks for oil and gas companies and their investors from a transition to a 1.5°C world.

At present, that excess investment can only be justified as being consistent with the world’s climate goals by a heavy reliance on future carbon capture and removal. However, given the risks and uncertainties in these technologies it is highly likely that they will not materialise at the pace and scale that these scenarios require.

As a result, an ever-increasing gap emerges between the current emissions pathway – where high levels of fossil fuel emissions continue on the assumption that they will be mitigated by future large-scale deployment of carbon capture and removal – and a technically achievable pathway to 1.5°C. The growth of this gap increases the risk of a sudden and disorderly transition of the kind the Governor of the Bank of England Mark Carney has warned of, as closing this growing gap would require increasingly heavy-handed intervention.

The UN Principles for Responsible Investment (PRI) has suggested that such a forceful intervention would be likely to include government action such as restricting demand for fossil fuels or reducing the supply of fossil fuels through the sudden and immediate phasing out of existing fossil fuel infrastructure. Such a policy response would have a significant and immediate impact on the valuation of oil and gas companies.

The financial risks of excess investment in oil and gas extraction are not limited to the sector; they extend across the global economic system. This investment creates huge risks to the world’s climate from locking in long-term emissions from new oil and gas production that is incompatible with limiting warming to 1.5°C. Doing so puts the world closer to a dangerous ‘business as usual’ pathway and increases the risk of a failure to transition in line with the Paris goals.

The potential costs of a failure to transition are vast. A study by Schroders found that the world is currently on track for around 4°C of warming which could lead to global economic losses of up to $23 trillion per year – the equivalent of three to four times the losses incurred in the 2008 financial crisis, every year. This scale of loss represents a systemic threat to the global financial system.

The risks to the sector and the systemic risk to the financial system can by minimised through avoiding overinvestment in new oil and gas fields. Capex decisions made in the short to medium term will shape the extent to which these risks materialise.

Our analysis has focused on new fields, as there is significantly more scope to adjust capex plans where development has not yet started. Project investment decisions now will shape the energy transition, either locking in higher emissions and raising the risks of a disorderly transition, or avoiding overinvestment and ensuring a smooth transition to achieve the Paris climate goals. To minimise the risks and ensure an orderly transition, companies should align capex with robust 1.5°C scenarios that do not rely on unrealistic models of future carbon capture and removal.