Blocks off Africa’s coast have already been snapped up by exploration companies but what of East Africa’s enormous great lakes? With exploration well underway in Lake Albert and plans laid down for Lake Malawi, Philip Kleinfeld looks at the social, political and environmental challenges.

Jocelyn Saurini semiliki_105 Bird on a boat in a pretty, colorful picture.

Blocks off Africa’s coast have already been snapped up by exploration companies but what of East Africa’s enormous great lakes? With exploration well underway in Lake Albert and plans laid down for Lake Malawi, Philip Kleinfeld looks at the social, political and environmental challenges.

It wasn’t long after oil exploration began on the Ugandan side of Lake Albert that the first signs of trouble emerged. On a summer’s day in August 2007, a barge belonging to British oil and gas company Heritage Oil Corporation was attacked by soldiers from the Democratic Republic of Congo, Uganda’s neighbour to the West. Four people, including a 31-year-old British oil contractor Carl Nefdt, lost their lives.

Soon after the incident Ugandan president Yoweri Museveni met with his Congolese counterpart, Joseph Kabila, in Tanzania, signing the Ngurdoto Agreement and promising to carefully demarcate Lake Albert’s border. But the good faith didn’t last for long. On 24 September, just a few days after putting pen to paper, it was the turn of Ugandan troops to open fire, this time on a civilian boat carrying Congolese nationals. Six died on that day, including one young child.

Fast-forward nearly ten years and Dickens Kamugisha, CEO of the Africa Institute for Energy Governance, says little has changed. “The two countries agreed to share the benefits of the hydrocarbons exploited in the border area but it hasn’t happened,” he says. “The border between DRC and Uganda is still not demarcated and there is likely to be more trouble as Uganda increases actual oil production. Just a month ago four police officers were killed by DRC security, for example, over claims they had crossed over into Congolese waters.”

The dispute between DRC and Uganda underscores the difficulties facing different stakeholders as hydrocarbon discoveries are made in East Africa’s Great Lakes, where maritime boundaries are often blurred. “Talk to people from DRC and they will say that Ugandans are stealing our oil,” Kamugisha says. “There is a lot of suspicion. If any oil activity causes a spill in Lake Albert or anything owned by DRC they will be bringing legal action.”

On Lake Malawi – a popular tourist destination straddling Malawi, Tanzania and Mozambique – a decades-long territorial dispute has also ramped up in the past few years as the potential for discovering oil and gas increases. Troubled flared up in 2011 when the Malawian government awarded four exploration licences and continues until today. Just last month Tanzania published a map showing newly created boundaries which Malawi’s Chief Secretary George Mkondiwa labelled “propaganda”.

Communities hung out to dry

The effect of offshore oil and gas production on local communities in the Great Lakes region is another major concern according to campaigners. On the Ugandan side of Lake Albert, where companies including Tullow and French Total are engaged in exploratory drilling, thousands of villagers have had their livelihoods ruined over the past few years.

“Oil has already led to the displacement of local communities,” says Luke Patey, senior researcher at the Danish Institute for International Studies. “This is creating social grievances that could lead to protest and conflict between these communities and government security forces. It’s really not the best starting point for oil in Uganda”.

Kamugisha believes that, if the Ugandan government wants to improve the situation and empower local communities, it will need to show greater transparency. “If you don’t have the information around the licences and agreements then you can’t actually hold the government and the companies accountable,” he says. “It is now our struggle in Uganda to fight for that transparency and allow citizens to participate in the process.”

With President Museveni winning his fifth term in power back in February amid what Amnesty International described as “a crackdown on the rights to freedom of expression, association and assembly”, Patey says he is not optimistic that will happen. “It’s not a situation where there is a lot of space for domestic or international civil society or NGOs to protest or to criticise the government’s behaviour around oil,” he says. “The signs point towards strong military and state control over the oil sector so it is not looking like this will be a very transparent industry at the moment.”

“The signs point towards strong military and state control over the oil sector so it is not looking like this will be a very transparent industry at the moment.”
Recent suggestions that the oil-bearing strata of Lake Albert may extend into east DRC are also a cause for concern, experts say. The country’s restive Kivu provinces remain pockmarked with rebel groups and a recent report by the International Crisis Group said an oil rush could “exacerbate deep-rooted conflict dynamics”.

“For now it is very clear that DRC lacks capacity to have total control over the eastern part of the country,” says Kamugisha, adding that President Kabila’s decision to delay elections and cling onto power may allow those groups to “become stronger”.

“As long as you have them in the area it will not matter whether the oil activities are taking place on the Ugandan side or the DRC side,” he adds. “It will become a very big menace for all of us.”

As things stand low oil prices are likely to dissuade companies from investing in challenging countries, but with preparations underway for a new regional pipeline running from Lake Albert to Tanga Port in Tanzania, Patey says that could change.

“In terms of the wider region – DRC, Tanzania, Burundi – what could encourage more exploration is the finalisation of this pipeline,” he says. “If you have a starting point for a pipeline near the eastern coast of Lake Albert then suddenly all of the other territory opens up. Congo is no longer very far away from international markets, from the Pacific and Indian oceans.” 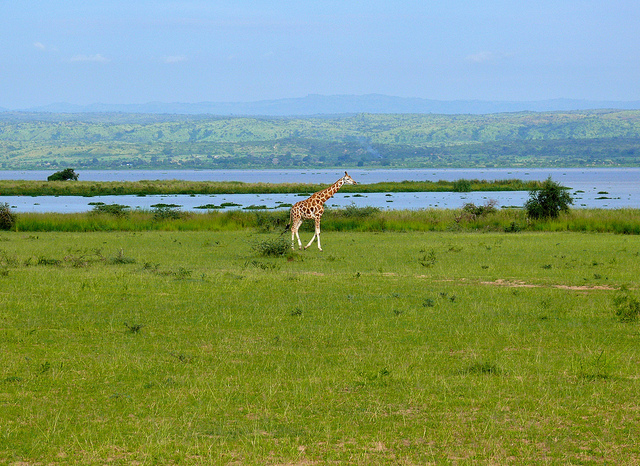 For environmental campaigners that will be cause for alarm. Among the eight lakes which make up the region are some of the most ecologically diverse freshwater systems in the world. According to a recent letter published in Science, an oil spill in Lake Tanganyika, for example, which supports more than ten million people, would “markedly affect the health, water supply, and food security of local communities,” and be a “global catastrophe for biodiversity”.

Meanwhile on Lake Edward, shared between Uganda and Virunga, a national park in DRC where half of sub-Saharan Africa’s biodiversity can be found, campaigners fear an oil spill could also devastate the area. “It is very dangerous,” says Kamugisha. “Virunga is such an important, protected area with biodiversity that you may never find anywhere else in Africa and even beyond. If anything is done on Lake Edward or Queen Elizabeth National Park you are really talking about affecting the entire ecosystem of that area.”

While oil companies have so far shied away from bidding for the Ngaji block, which covers half of Lake Edward and large parts of Queen Elizabeth, controversy around Virunga and in the wider Great Lakes region is unlikely to go away. “The essential problem is that when an exploration company comes in they don’t have a 30 to 40 year perspective in mind,” says Patey. “They may cut environmental corners and they may not have very transparent or fair relations with local communities living in their exploration zones. They just want to make a discovery and sell it.”