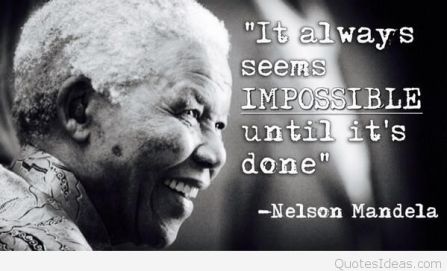 Nelson Mandela belonged to that exceptionally rare and endangered breed of the African elite that broke vernacular barriers to build a Rainbow Nation. With considerable effort and remarkable foresight, he harnessed diversity into a common nationhood. He built and unfailingly respected democratic institutions, and bequeathed to the world, a progressive and modern model Constitution whose Bill of Rights informed our own.His leadership after apartheid should illuminate our constitutional moment as we struggle to stabilise our politics, law and institutions. By honouring court summons to testify, publicly acknowledging and accepting court orders that reversed his decisions, Mandela personified respect for rule of law, independence of the Judiciary and the principle of separation of powers at a delicate moment of political transition in a fragmented and divided society. By choosing the path of allegiance to law, Mandela cast himself on the right side of history. It made him bigger, not smaller.We must interrogate the construction of our value systems. It is remarkable that Mandela, a man who spent 27 years of his life in prison, kept away from the information superhighway and books, had such clarity of mind on the high principles of democracy, rule of law, humanity, limited and accountable power.

Yet those of us who have been free all our lives, beneficiaries of modern technology and discoveries in the sciences and the arts, display a jaundiced and narrow view on these issues. We are incapable of stitching together our ethnic diversity, bow to the demands of the law, dream big, expand our vision, respect our Constitution and professions.If from prison Mandela was able to rise above petty divisions and visions, then, in freedom, our standards are giving freedom a bad name! A modern stage that we occupy without a modern conduct makes us and society prisoners in a prison bigger than Robben Island or Kamiti.The Rivonia and Kapenguria Trials were themselves stages for the miscarriage of justice, where the very aspirations of a people for justice and freedom was on trial. They were conducted by members of the legal profession steeped in mindless legal centricism and political correctness but also challenged by members of the same profession committed to justice and challenge of the status quo.

These dialectics have dominated the legal profession and the Judiciary for the last 50 years. I want each one of us to reflect on which side of the divide we have occupied and whether in choosing our side we have advanced the cause of justice, freedom and democracy in whose name we ALL now celebrate Mandela and in whose name we ALL now celebrate a country and a Constitution.If we don’t hold each other to account, and if we don’t remain vigilant, and if we don’t choose the side of justice, freedom, and democracy the way Mandela did, then a re-staging of the trial of the peoples’ aspirations will occur again.