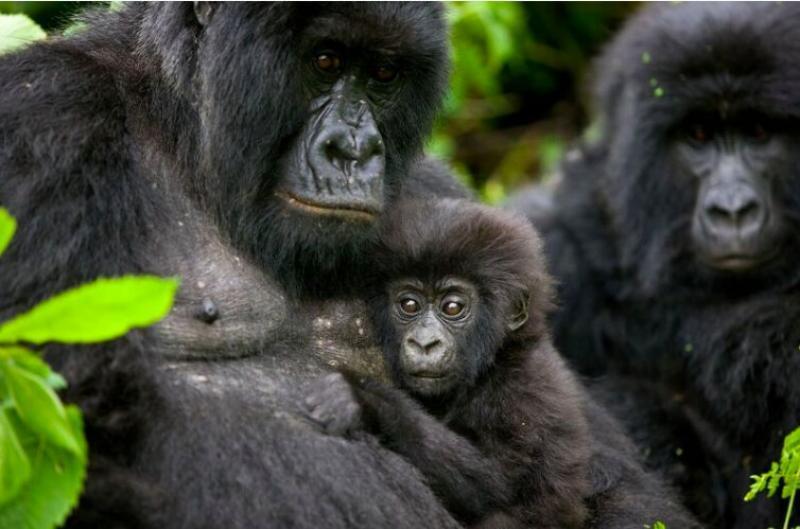 Stretching some 3,000 square miles, Virunga National Park, in the Democratic Republic of the Congo, is the oldest and most biodiverse national park on the African continent. It was designated a UNESCO World Heritage Site in 1979. With terrain ranging from volcanoes and glaciers to verdant tropical rain forests and wetlands, the park is home to hundreds of species, including hippos, elephants, chimpanzees and — most notably —a quarter of the world’s endangered mountain gorillas.

For all of its natural beauty, Virunga is also located in one of the most dangerous parts of Congo and the park has long been plagued by violence. Dozens of armed groups operate in the area, often exploiting and illegally trafficking Virunga’s resources to fund their activities.

Twelve of Virunga’s rangers were killed by armed combatants, thought to be members of the Democratic Forces for the Liberation of the Rwanda (FDLR), in late April. A driver and four civilians also died. According to Andrew Campbell, chief executive officer of the Game Rangers Association of Africa, the attack was the deadliest single incident in ranger corps history on the continent.

“Congo is the most volatile area in terms of ranger deaths in Africa,” said Campbell. “Virunga is sort of the epicenter of that.”

In 2014, Park Director Emmanuel de Merode, an award winningBelgian conservationist, was shot four times by unknown assailants. He survived. In 2018, the Park closed for eight monthsafter a female ranger was killed, and two British tourists and their driver were kidnapped by militants. Hundreds more rangers have died defending Virunga.

Now the park must contend with the coronavirus pandemic.

While most of Congo’s Covid-19 cases have been contained to Kinshasa, the capital, Virunga has already suffered massive financial losses related to the pandemic. Congo closed its border in late March, and Virunga is shut to tourists, who usually pay $400 for a single gorilla trekking permit. With the arrival of Covid-19, some 40 percent of Virunga’s revenue disappeared overnight.

Gorillas, who share 97 percent of their DNA with humans, can catch illnesses like the flu. Visitors are normally required to keep a minimum distance off 22 feet from the primates. The International Union for the Conservation of Nature asserts that these measures are particularly crucial now, as gorillas may be susceptible to Covid-19.

“Limiting human contact with the gorilla population is the best way to protect them from the spread of potential transmission of any diseases. But this has significant implications for tourism and the park’s operations, which has a knockout effect on the local community and the surrounding economy,” de Merode said. (Read more about wildlife tourism and the risk of spreading disease to wild animals).

About 70 percent of Congo’s population already lives in extreme poverty, according to 2018 statistics by The World Bank, subsisting on less than $1.90 a day.

“Price inflation linked to the pandemic is driving food costs up, and this could fuel poaching if local armed groups see it as a lucrative business opportunity,” de Merode added.

In May, Earth Alliance — co-founded by actor Leonardo DiCaprio, Emerson Collective, and Global Wildlife Conservation— and the European Commission, launched the Virunga Fund with $2 million in seed money in response to these challenges.

“Virunga urgently needs funds to protect the endangered mountain gorilla population, to provide support to rangers and the families of rangers who have tragically fallen in the line of duty, and to help deliver essential disease prevention efforts. It’s critical that we rally together during this incredible time of crisis,” DiCaprio said in a press statement.

Experts assert that Virunga’s current tribulations are shared by a number of the 268 national parks across the African continent, exemplifying the vulnerability of a system in which tourism bankrolls environmental preservation.

“It is good that tourism can contribute but we cannot depend on tourism alone to fund conservation,” Guy Debonnet, UNESCO chief of unit for nature, sustainable tourism and outreach.

Michael O’Brien-Onyeka, senior Vice President for the Africa Field Division of Conservation International, described the decline in tourism as “utter and total devastation” for national parks, and other community based conservancies.

“Tourism shouldn’t go away, but it shouldn’t be the only thing,” he said.

In Uganda, for example, primate trekking revenues from Bwindi Impenetrable Forest and Mgahinga Gorilla National Park account for about 70 percent of the Uganda Wildlife Authority’s budget, according to spokesperson Bashir Hangi.

“This is a very sad story for us. The loss is big. There is going to be an impact on parks across the country,” he said.

Campbell, of the Game Rangers Association, says one park in east Africa has already cut ranger salaries by 30 to 50 percent. With park rangers often acting as the primary breadwinners for their families, these sorts of pay cuts effect a large network of people.

“Even though rangers are deemed essential services in most countries, you still need money to pay them. And where do you get that money if your model has relied on tourism dollars, which are not flowing at the moment?” asked Campbell.

“There’s no sign of tourism starting up,” he added.

Meanwhile, environmentalists at Conservation International have reported an increase in illegal bushmeat or small game hunting in Kenya, as people struggle from the economic fallout caused by Covid-19 restrictions and lockdowns. Ivory poaching is also reportedly on the rise there.

O’Brien-Onyeka, of Conservation International, asserts that nature itself is key to mitigating the harm of the coronavirus pandemic. “Nature can help get us out of Covid by utilizing nature to create jobs, to absorb the huge unemployed population, and create a good catalyst for economic recovery,” he said.

The organization is already working with farmers to rehabilitate degraded rangelands, aiding in conservation and providing a steady income to rural communities. It launched a carbon offset program in Kenya’s Chyulu Hills in 2017, with an initial sale of 2 million carbon credits, to support preservation efforts and local livelihoods.

Virunga has also started to look towards to other sources of revenue. Since 2010, the park has been working to construct eight hydro-electric dams. These could ultimately provide 100 to 120 megawatts of electricity to the populations surrounding Virunga and create up to 120,000 jobs using profits from the plants.

“There has always been a determination to protect Congolese parks, and I think that is a remarkable story to tell,” said Debonet, of UNESCO. “This is an incredible contribution that Congo has given to the rest of world . . . . The Congolese are the heroes of that story.”

“The highest priority is given to maintaining the crucial work of rangers in protecting Virunga’s wildlife and surrounding community,” said de Merode.

Sophie Neiman is a freelance journalist and photographer. She spent a year reporting on politics, conflict and human rights in Uganda and currently lives in the United States. More of her work can be found at www.sophieneiman.com.

The last time a mountain gorilla was killed by a spear was in June 2011, according to the International Gorilla Conservation Programme. But there are signs that poaching in gorilla parks has increased in recent months, as tourism has fallen because of the coronavirus pandemic, the organization said.