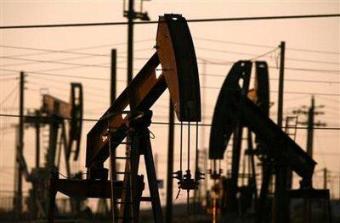 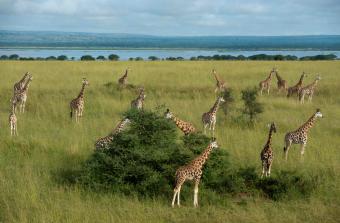 A herd of Rothschild’s giraffes grazing on trees 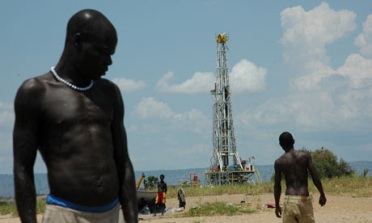 In late 2020, the governments of Uganda and Tanzania inked key agreements with a consortium of international oil companies and in so doing, injected momentum into a planned oil industry in Uganda. Nearly 15 years after the confirmation in 2006 of “commercially recoverable” quantities of oil in the Albertine Basin, Uganda and its international partners finally appear confident of taking Final Investment Decision (FID). However, in the intervening period, prospects for the global oil industry have changed dramatically and serious questions have been raised about the environmental risks associated with oil in Uganda. These have called into question
the industry’s economic viability for the international oil companies and its potential to be a major part of Uganda’s economic development plans.

Among the many headwinds that the global oil industry faces, a low carbon transition that brings a structural long-term shift away from fossil fuel consumption is one of the most serious. A transition that is aligned with the goal of the Paris Agreement to keep global warming to well below two degrees celsius (WB2C) could reduce global demand for oil, resulting in lower prices and hitting the value of physical and financial assets, tax flows, jobs and knowhow linked to the oil sector. These risks are what we call “climate transition risk”.

Climate Policy Initiative’s Energy Finance team, with the support of the Rockefeller Brothers Fund, have examined the impact of climate transition risk on Uganda’s planned oil industry. The analysis was designed to provide a transparent and balanced assessment of the impact of a global low carbon transition on Ugandan oil aimed at key potential investors (principally, Total SA or Total and China National Offshore Oil Company or CNOOC) and lenders, but above all, the Ugandan government. The analysis uses economic and financial modelling to quantify the impact of a global low carbon transition on the profitability and value of Uganda’s two principal upstream oilfields (Tilenga and Kingfisher), the export pipeline that would transport crude oil to export markets via Tanga port in Tanzania (the East Africa Crude Oil Pipeline or EACOP) and the planned oil refinery in Hoima province. The analysis included an assessment of how that change in value would be allocated between the Ugandan government, international investors and lenders, and between the upstream fields, EACOP and the refinery.

Several significant findings emerged from this analysis, which are summarised in this section, including:

This report outlines the results of the analysis that we undertook to arrive at the findings included in this Executive Summary.

We concluded that, for Uganda, an economic strategy that relies on oil as a major driver of economic development is an increasingly risky one and may not be as conducive to sustainable development as a diversified strategy with more emphasis on other economic drivers, such as electrification. Uganda should consider carefully whether the potential value from its oil industry still outweighs the risks. However, at the same time, Uganda’s deteriorating public finances mean it has limited flexibility to change strategies and is likely to need proactive support from donors and development finance lenders in order to pursue alternative options.