What is Happening in Virunga and with the Communities?

The park was established in 1925 as Africa’s first national park. It was classified as a World Heritage Site in 1979. In recent years the park has become known for its mountain gorillas, although poaching and the Congo Civil War have seriously damaged its wildlife population.

The history of the park is deeply affected by the country of which it is part. For much of its long history, Virunga National Park has struggled to survive through many of Congo’s troubled times. Thanks to the dedication of certain politicians, conservationists, park rangers and wardens, the park not only has survived, but is currently experiencing a dramatic renewal. International donors are investing in the development of the park’s infrastructure at unprecedented levels. Virunga’s management is efficient and transparent, and morale among the rangers is at an all time high.

Africa’s first national park has managed to preserve its species diversity and its population of mountain gorillas have more than doubled in numbers since the late 1980s largely because of the dedication of the rangers and staff, despite exceptionally difficult conditions. Over 140 of Virunga’s rangers have lost their lives protecting the park since the beginning of the war in 1996.

Virunga National Park is unrivalled in its diversity of landscapes and ecosystems.
Source: Wikipedia

Virunga Park Under Siege
If you want to know more about the 18-year key events that have undermined conservation efforts in Africa’s oldest national park check National Geographic’s interactive time-Line.

The park’s future is threatened: oil has been discovered, and the Congolese government has awarded three concessions for oil exploration, which cover 85% of the park. Oil becomes the most important threat to the park and to the ecosystem.

When drilling takes place in Lake Edward and the slightest accident occurs, the pollution and possible oil spill in this environment, with difficult access, will be uncontrollable and affect at least the survival of 40,000 families living in and around the park. Most importantly, being an upper stream basin of the African Great Lakes, the Nile could be contaminated, and eventually the Mediterranean sea.”

In principle, the Virunga National Park is protected under Congolese law. It prohibits any oil exploration and extraction. Two of the three oil companies initially interested, Total and ENI, have promised not to enter the park. The boss of Total has pledged not to conduct exploration activities in the park periphery. However, a third company, the English Soco, listed on the London Stock Exchange, proved far more intrusive. Source

Last Update on the Oil Threat

If you want to read more about the last development around SOCO and the oil exploration threat in Virunga check Emiliy Lora James’ article.

Lake Edward or Edward Nyanza is the smallest of the African Great Lakes. It is located in the Albertine Rift, the western branch of the East African Rift, on the border between the Democratic Republic of the Congo and Uganda.
The lake was named by the explorer Henry Morton Stanley in honour of Prince Albert Edward, The Prince of Wales, later to become King Edward VII.

Settlements
Lake Edward lies completely within the Virunga National Park (Congo) and the Queen Elizabeth National Park (Uganda) and does not have extensive human habitation on its shores, except at Ishango (DRC) in the north, home to a park ranger training facility. About two-thirds of its waters are in the DR Congo and one third in Uganda. Apart from Ishango, the main Congolese settlement in the south is Vitshumbi.

Fishing is an important activity among local residents; nearly 20.000 people depend directly on these resources for their survival. Lake Edward “provided important fisheries in the past, with harvests composed primarily of tilapia, catfishes (Bagrus spp. and Clarias spp.), and lungfish.” During the late 1950s and 1960s, a few small industrial processing operations were established in the vicinity of Lake Edward and George, and supplied Kampala and other urban markets in East Africa with frozen tilapia fillets and other products. All of these plants had ceased operations by the mid-1970s, owing to a combination of factors, including overfishing, mismanagement, and growing civil and economic turmoil. Source: ILCE

Fauna living on the banks of the lake – including chimpanzees, elephants, crocodiles, and lions – are protected by the national parks. The area is also home to many perennial and migratory bird species. Source: Wikipedia

SOCO International plc is an international oil and gas exploration and production company, headquartered in London. SOCO holds rights on the oil concession in BLOCK V (in July 2012 SOCO increased its stake to 85%). 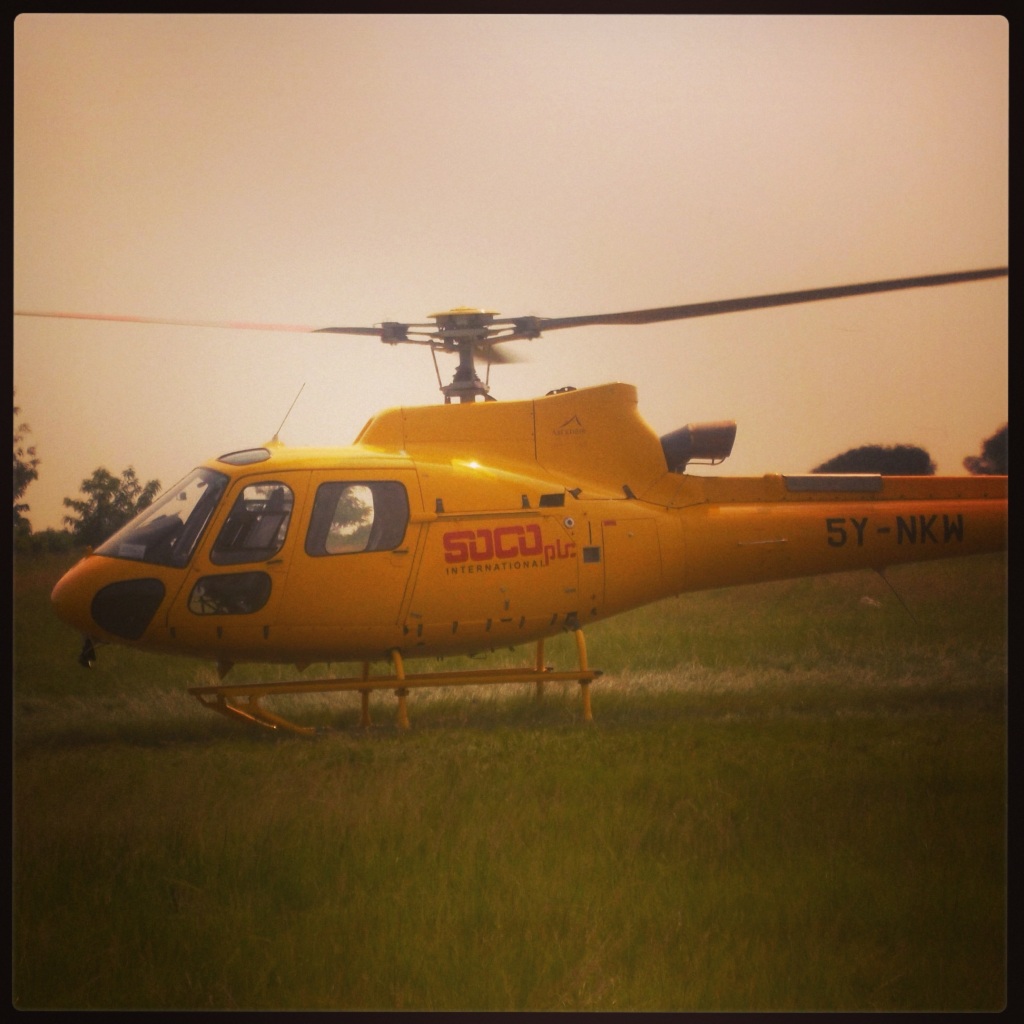 “SOCO’s contract allows them access to 1,500 square miles of Virunga National Park (National Geographic), threatening the park with disruptive seismic tests, forest clearing, underground drilling and the laying of vulnerable oil pipelines. Additionally, the extraction of oil from Virunga will cause a large influx of people to the park which will also be detrimental to the environment, although will provide jobs.

SOCO is currently undertaking a seismic study to determine whether there are oil supplies beneath Lake Edward. The international mining corporation has received floods of criticism from local and international conservationists, WWF, human rights groups and the British government. UNESCO who listed Virunga National Park as a World Heritage Site in 1979 has stated that oil exploration in the park violates the Democratic Republic of the Congo’s commitments to the World Heritage Convention and has called for the cancellation of all oil permits inside the park.

SOCO has therefore stated [June 11th 2014) that they will not drill for oil inside Virunga National Park, presenting the following statement with the World Wildlife Fund. ‘In relation to Virunga National Park we will complete our existing operational programme of work in Virunga which we anticipate will conclude within approximately 30 days of the date of this statement. The company commits not to undertake or commission any exploratory or other drilling within Virunga National Park unless UNESCO and the DRC government agree that such activities are not incompatible with its World Heritage status’ (Statement). This shows however that SOCO is open to drilling for oil if the park’s World Heritage status is removed or adapted; oil exploration may therefore occur in the future, posing the same threats to the park. Source

Virunga’s fauna and flora, as well as the political and security situation in the area are tied closely to the people and to the protection and preservation of this ecosystem. Disruptions in one element lead automatically to changes in the others. The existence of a national park creates a particular sort of stability in the fishing villages and in the way they live in harmony with the park environment.

Lake Edward lies completely within the Virunga National Park and has three main fishing villages. The three legal fisheries are: VITSHUMBI on the Southern shores, NYAKAKOMA on the South Eastern shores and KYAVINYONGE on the Northern shores of the lake. All these fisher’s villages account for a population of approximately 50.000 habitants.

The rest of the fisheries and sites around the lake are illegal, but still provide resources and contribute directly to food security for +/- 15.000 people.

In order to ensure sustainable management of the park’s resources and preserve the functions of this ecosystem for future generations, local communities need to be at the forefront of decision making. Oil exploration forms not only a serious threat to the oldest and most precious nature reserve in Africa but also to the survival of more than 50.000 people that depend on the park and its lake for their livelihoods.

Virunga National Park in DR Congo is at a crossroads: should the Congolese people choose to invest in sustainable development, or in oil exploration?

On the other hand, the Congolese fear that oil exploration will not contribute to the local economy. In the above video, local people express their concerns to the Congolese government, which will discuss the status of the oil bill in the coming weeks.

Local communities and environmental organizations also worry that the search for oil will damage the vulnerable ecosystems in the park. Many people depend on these ecosystems for their daily fish catch and their water supply. Moreover, the upcoming oil industry may spark social unrest. DR Congo has dealt with years of conflict. “Sustainable development is necessary to prevent these conflicts on natural resources from flaring up again”. Source

Since the beginning of SOCO’s exploration operations in Virunga National Park, Environmental and Human Rights defenders fighting for the survival of the park and the respect of community rights have been target of intimidation and threats.Many local defenders and community leaders have been alerting the world of the dangers community members and themselves are facing when fighting for Virunga and the sustainable development option.
They are often putting their lives, their staff and their organizations at risk, with little recognition or support.

Virunga cannot survive without them, without their voice and courage. They are all people who have the courage to stand up and demand that SOCO, their government and the international community uphold the basic freedoms and rights of communities and choose for the best people’s option in North Kivu:

No to oil in Virunga

No to trampling with the laws of the country

No to Human Rights violations of communities

No to threats to Civil Society opposing Oil

Check here a recollection of all these voices and messages alerting the world of what is happening on the ground.

JOIN THE FIGHT
If you want to help us keep these voices alive and local communities abreast of and involved in the decision making process around oil exploration in North Kivu.

5 thoughts on “What is Happening in Virunga and with the Communities?”

This site uses Akismet to reduce spam. Learn how your comment data is processed.